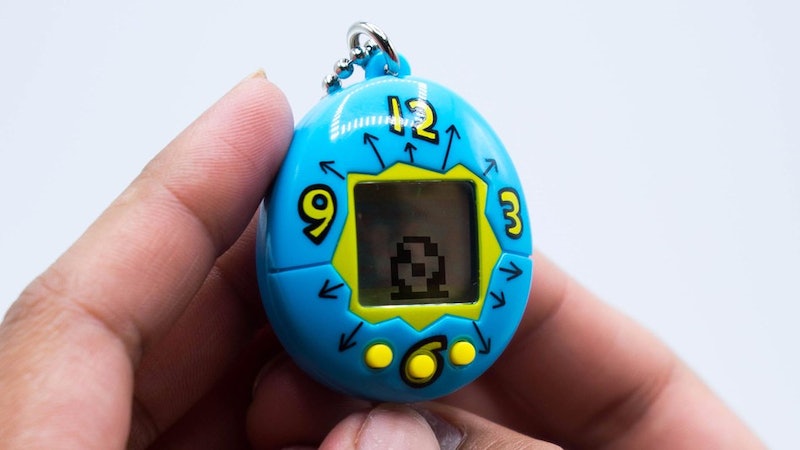 Remember how you beg, beg, begged for a Tamagotchi for Christmas in the '90s, and then had to wrestle with the lifelong guilt complex in the aftermath of accidentally letting them die, rebooting them, and then accidentally letting them die again? Now you can relive your questionable technological parenting skills all over again in 2017, because Tamagotchis are officially coming to the U.S. on November 5. Bandai Namco, the company behind the resurgence of your semi-murderous youth, actually re-released the Tamagotchi in Japan earlier this year; alas, now you will no longer have to cross an entire ocean to get your hands on a new pet.

The new Tamagotchi, according to Game Spot, is fairly similar to the old one, except that it's smaller and actually has fewer features than its predecessor. You are still obligated to feed it and clean it, which it will bleep at you to remind you of in regular intervals. Oh, and it can still die. Just in case your first accidental Sim death didn't harden you to your own fleeting mortality sometime in the early 2000s, you should go in prepared for that scenario, too.

As for the limited features and the smaller redesign, Bandai America Director of Brand Management Tara Badie told Game Spot that this was a very intentional move aimed at a millennial audience: "We're targeting your generation, who are online and [lead] crazy busy lives. It allows you to kind of relive it, but in a more simplistic way."

(Am I allowed to ask if we're going to get a millennial parenting version of that with human babies without running the risk of getting the children I don't have taken away from me before they're even conceived?)

The new Tamagotchi will come in six different designs, which include yellow, hot pink, white, blue, light blue, and translucent blue. I should probably be more concerned after all the emotional investment and impact that it once had on my narrow little world that I cannot remember for the life of me what color my Tamagotchi was in the '90s. (Sorry, Santa.) The six original creatures will also be gracing your teensy screen, and just like in the '90s, will appear at random.

Fun fact, for anyone who wants to feel especially old today: there's a reason why Bandai Namco is putting out a special edition this year, and it's because — maybe you want to sit down for this one — it's the 20th anniversary of the original 1997 edition Tamagotchi. Many of us have pets and actual human children now. The times that aforementioned Tamagotchis were supposed to be preparing us for are already here.

But in case you're looking for reasons to fully regress into your '90s self (and honestly, in 2017, who isn't?), you can get yourself one of these babies and top it off with some other '90s throwbacks. For instance, velvet just made a fashion comeback, and Lunchables just did us all the great service of releasing Pizza & Treatza packs back out into the wild. Who needs a time machine when you can just hide in the refrigerator aisle in luxurious crushed velvet, poking a nonexistent screen creature on your keychain until it repays you for your kindness and attention by flashing a skull and dying of old age after a week?? (Real talk, guys: we all still have nightmares about our Tamagotchis dying, right?)

Prepubescent nightmares aside, the new Tamagotchi will be available for purchase in stores starting November 5 and available for preorder today in what Bandai Namco is calling a "limited release" for $14.99 each, so you better hustle if you want one. May the '90s baby gods be ever in your favor.

More like this
Here’s How To Make The Spotify Music Festival Lineups Taking Over Instagram
By Alexis Morillo
The First Trailer For 'That '90s Show' Includes So Many Nods To The Original Series
By Jack Irvin, Alyssa Lapid and Grace Wehniainen
How The Thanksgiving Episode Of 'Gossip Girl' Changed Pop Culture History
By Gabrielle Bondi
Here’s How To Find Your Spotify Wrapped
By Emma Lord and Emma Carey
Get Even More From Bustle — Sign Up For The Newsletter