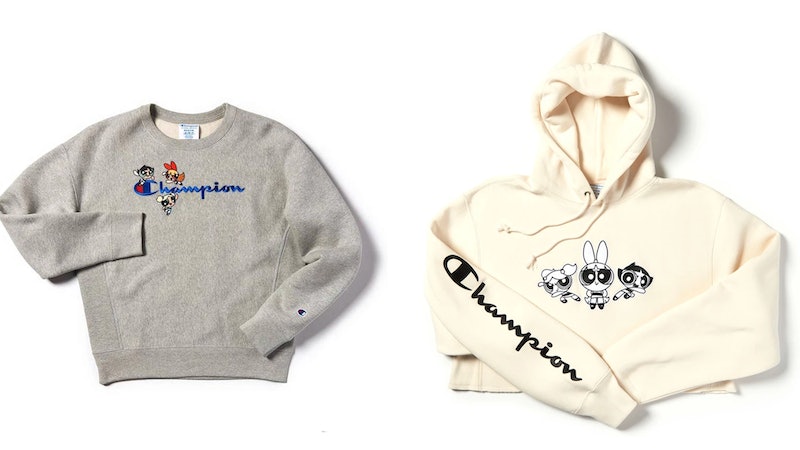 Adulthood can be tough at times, but if there's one thing you can rely on to cure those grown-up blues, it's a warm dose of animated nostalgia. I mean, who's says you can't enjoy the toons of your younger years when you hit your teens, twenties and beyond? Well, thanks to sportswear brand Champion, you'll be able to do so in style, as they are teaming up with Cartoon Network to celebrate the 20th anniversary of the Powerpuff Girls (I know — so exciting!). So, here's where to buy Powerpuff Girls x Champion's collection in the UK.

While it seems that the collection won't be available directly from Champion UK (I’ve contacted a representative for more deets, but have yet to hear back), you should be able to purchase these beauties from Champion’s U.S. site. Phew. All hail international shipping. And, thanks to Champion’s partnership with global shipping company Borderfree, not only can you buy items from the States but you can also do so in your preferred currency, making life a hell of a lot easier. (However, as a side note: going by some experimentation I did, it seems like it might actually cheaper to purchase products in dollars rather than pounds.) The only downside? Shipping fees do apply (staring at around £17) — any free-shipping offers apply to U.S. shipments only.

So, what does this awesome collection actually entail? Sugar, spice, and everything nice, of course. According to fashion site Hypebae, this collaboration between Champion and Cartoon Network will include "hoodies, a crewneck sweater and joggers that are covered in graphics of the superhero trio," alongside the iconic Champion logo. Yeah, this is totally something I do not want to miss; I need to rep the iconic gal trio that is Blossom, Buttercup, and Bubbles.

Champion have yet to reveal an actual date for when the collection will drop, but Hypebae have stated it will be available in the upcoming week. The brand will be holding a themed party at their New York City store on Jan. 26, and if you happen to be in NYC at the time, you'll be able to partake in photo-ops, giveaways, and even screenprint some T-shirts.

If you're looking for some more nostalgia-fuelled fashion choices, you're totally in luck. Collabs between clothing brands and well-known animation properties is pretty popular at the moment. From the recent Disney ranges from ColourPop and Vans with Disney to past collabs such as Skinnydip x The Simpsons and Adidas x Dragonball Z, it's clear that adults are still in love with the toons that gave them so much joy as kids. Hell, I'm literally wearing a Reptar dressing gown from Primark as I'm write this.

Champion have totally hit it out the park with this collab choice, and, boy, do they have plenty of other staple '90s animations to choose from if they plan on doing any future collections. I would do anything for a Courage the Cowardly Dog collab in the future. C'mon Champion, you know what to do.