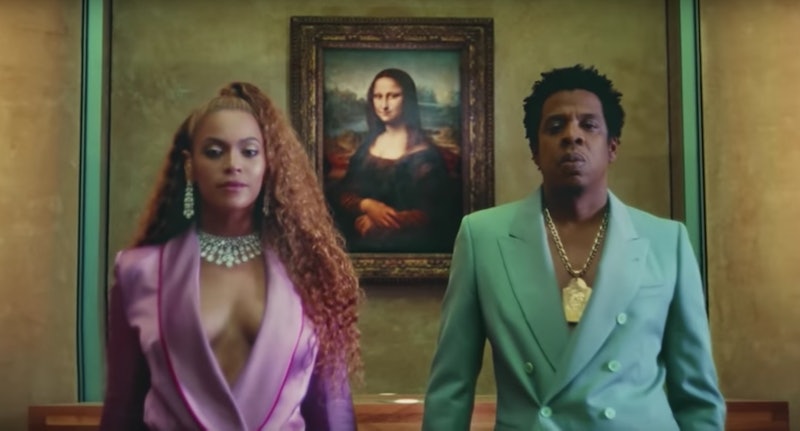 EARLIER: The Carters have pulled yet another power move. On Saturday, June 16, Beyoncé and JAY-Z shocked fans with the surprise release of Everything Is Love, a brand new nine-track album. The world, predictably, went "apesh*t." Fortunately, downloading JAY-Z and Beyoncé's Everything Is Love is much easier than predicting when the innovative couple is going to drop another industry-shaking release. But right now, there's only one source for your Carter family needs.

As of right now, the new album is available to stream and download exclusively on TIDAL, which is owned, in part, by JAY-Z. Fans can purchase a membership starting at $9.99 a month for the standard service, with discounts for student, military, and family plans. There are also "HiFi" premium memberships available for all of those categories; the starting rate for that without discount is $19.99, and it includes "High Fidelity sound quality," according to the service.

Not sure about committing just yet? TIDAL offers free trials of both the standard and HiFi memberships. They last for 30 days, and of course include the couple's most recent individual events, Lemonade and 4:44.

TIDAL doesn't work quite like iTunes; it's more similar to Spotify when it comes to downloading tracks for listening to when you're offline. So it can be a little confusing to figure out exactly how to ensure that you have access to Everything Is Love even when you're outside of good WiFi range. Well, the site WhatHiFi.com explains how to make your TIDAL library available offline.

Here's how to get your Carters on the go: Using the mobile app, go to the Everything Is Love album. Tap the dots next to each track, one by one, and select "Add To Playlist." Once you're done adding every song, head over to the My Music section of the app, and you should see all the tracks there. Then toggle the slider to download to your offline queue. Now, when you open up your Offline Content section, you should see the entire record. Now those tracks are available on your device all the time, even when the flight attendants ask you to switch on airplane mode.

There is a chance that Everything Is Love may become available on iTunes at a later date, as Bey's Lemonade eventually did. But there's no information out about that as of yet, and Apple did not respond to Bustle's request for comment.

Anyone can visit TIDAL's website to hear 30 second excerpts of every song on Everything Is Love: "Summer," "Apesh*t," "Boss," "Nice," "713," "Friends," "Heard About Us," "Black Effect," and "LoveHappy." And along with the album drop, the pair also dropped a surprise music video for "Apesh*t," which is fortunately (and benevolently, on the king and queen's part) available to watch on YouTube.

And no, that doesn't just look like the Louvre, the legendary art museum located in Paris. It is the Louvre. They let you film in the Louvre if you're JAY-Z and Beyoncé, which is one of the most significant revelations that this album has brought about.

Of course, it took no time for Everything Is Love to blow up the internet, with fans taking to Twitter to post their snap reviews and to marvel at being caught off guard yet again.

JAY & Bey just kicked off their co-headlining On The Run II tour in Europe earlier this month, and the North American leg begins in late July. So if you were thinking you'd be hearing just their existing hits at that show, think again. And there may be more videos from the album yet to come. The lesson in Everything Is Love is clear: never underestimate this pair's ability to surprise you.

More like this
Everything To Know About Taylor Swift’s 10th Studio Album, 'Midnights'
By Grace Wehniainen and Jake Viswanath
Twitter Is Freaking Out Over Rihanna’s 2023 Super Bowl Halftime Show Announcement
By Stephanie Topacio Long
Even If She Tried, Beth Ditto Couldn’t Stay Away From Music
By Ivana Rihter
Two UK Cities Are Now In The Running To Host Eurovision 2023
By Sam Ramsden and Rachel Mantock
Get Even More From Bustle — Sign Up For The Newsletter