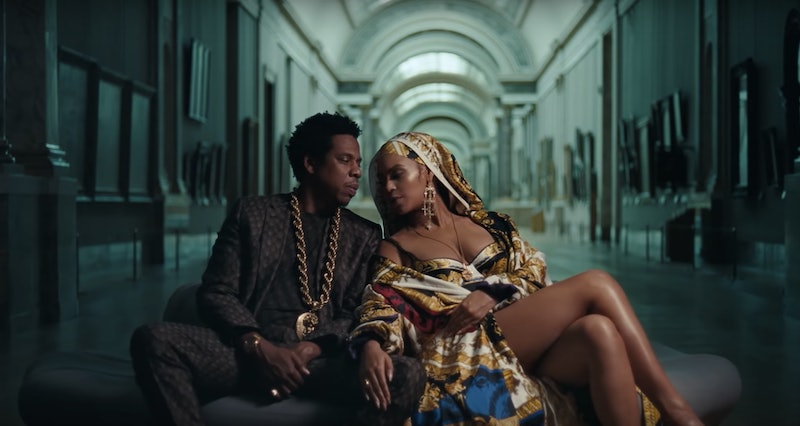 On Saturday, while most people were winding down from a hectic week, the first family of music dropped a collaboration album that no one saw coming. Yes, JAY-Z and Beyoncé have released a surprise album that has Twitter completely losing it, naturally, made up of nine songs featuring the couple. As usual, the album's initial release is limited, so if you're wondering how you can stream Beyonce and JAY-Z's Everything Is Love, you're not alone.

EARLIER: At the time of the album's release, it was exclusively available to TIDAL subscribers. Like most of both Beyoncé and JAY-Z's recent work, the streaming service has the exclusive rights to the tracks, which often leaves Spotify and Apple Music users wondering how they can listen to it. Bustle reached out to Spotify and Apple Music inquiring about when the album would be available on their streaming platforms, respectively, but did not hear back at the time. But, that doesn't mean all hope should be lost. TIDAL is currently offering a free 6-month trial period for new TIDAL subscribers, which will allow anyone to listen to the album by only signing up and providing a credit card at the time of registering. After the trial period is up, users can decide if they wish to keep the streaming service, or terminate their subscription. As GQ points out, you're also able to buy the album on TIDAL in their store for $9.99.

Fans of the Carter family know that they have a penchant for surprising listeners with albums. In 2013, Beyoncé surprised everyone with a self-titled album that no one knew was coming. And in 2016, she released Lemonade, which featured a film for the album, which premiered on HBO. Since then, it was greatly rumored that the couple, who has been married for 10 years, was working on a joint album. Nothing was confirmed (or denied) by either party at the time, so Everything Is Love's release is most definitely a welcomed shock to the world.

The couple announced earlier this year that they would be embarking on a world tour as a "Part II" to their 2014 "On the Run" tour. According to Twitter user Kassy Cho, who was at the "On the Run II" tour in London, the couple revealed the news of the album to the entire stadium of fans during their Saturday night concert with the words "ABLUM OUT NOW" taking over the venue .

The newly released album is made up of nine tracks, plus one additional track only available to TIDAL called "Salud." The couple also released the music video to "Apesh*t" on TIDAL, which was teased on Beyoncé's Instagram at the time of the album release. The track list for Everything Is Love can be found below.

The album is not yet available in the iTunes store for purchase, but Beyoncé's most recent album, Lemonade, which is still exclusively streamed to TIDAL, was made available to iTunes shortly after its release. Apple has not yet responded to Bustle's request for comment as to if or when the album will be made available.

For now, hopefully fans are able to sign up to subscribe to TIDAL (or at least sign up for the trial period) so they can listen to what The Carters have been working on recently. Plus, those with tickets for "On the Run II" may be able to catch Beyoncé and JAY-Z performing some of their new tracks at upcoming tour dates. Now that would be a great surprise.

More like this
Beyoncé’s Special Tribute To Sister Solange Was Both Touching & Hilarious
By Stephanie Topacio Long
Jason Derulo Is Launching A New Singing Show In The UK
By Maxine Harrison
Everything To Know About Taylor Swift’s 10th Studio Album, 'Midnights'
By Grace Wehniainen and Jake Viswanath
How Ghosts Inspired Kesha’s New Music
By Jake Viswanath
Get Even More From Bustle — Sign Up For The Newsletter