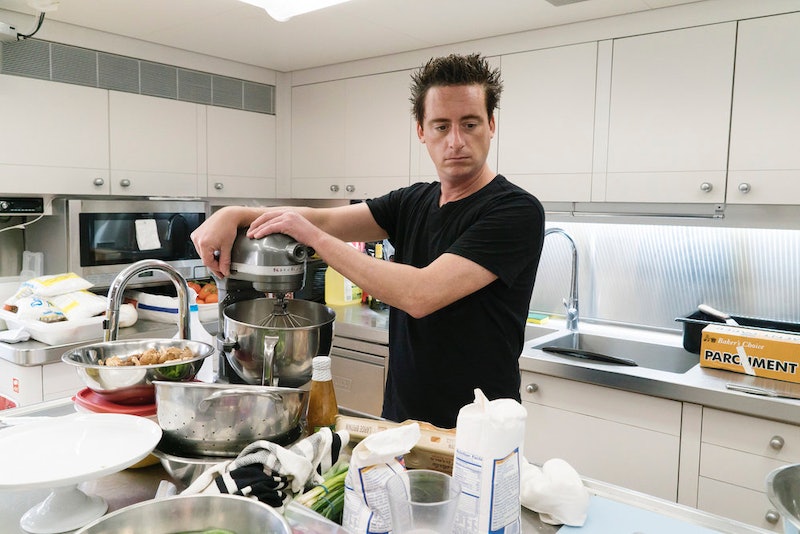 Luckily for you, I did all the social media stalking so you don't have to. I compiled a list of the most beloved and interesting cast members from Below Deck over the years and found their social media handles, so you can get your dose of entertainment in between seasons.

Unfortunately for the fandom, Below Deck doesn't air new episodes every day, but a lot of your favorite cast members do post on Twitter, Instagram, and Snapchat on a pretty regular basis, so that's just as good. Plus, you get to filter out the cast members who annoy you and just focus on the ones you adore. That sounds like the perfect way to get your Below Deck fix and pass the time before new episodes air.

If you love any of these cast members want to see more, definitely check out their social media accounts.

Ben Robinson appeared as a chef on Below Deck and Below Deck: Mediterranean, so he is obviously a fan favorite. You can get your Ben fix by following him on Instagram (@benstogram), Twitter (@benrobinsonchef), and Facebook (@benrobinsonchef). You can also keep up with Ben by checking out his official website and watching his Youtube videos of himself cooking with his costar and current girlfriend Emily Warburton-Adams.

On Below Deck, Captain Lee is the utmost professional. Sure, he gets his hilarious comments in here and there, but he is very focused on the job at hand. If you want to see some other sides to the captain you need to follow him on Twitter (@capthlr), Instagram (@captain_lee_rosbach), and Facebook (@BelowDeckCaptLee).

It can be argued that that Kate Chastain has the biggest personality on Below Deck. Love her or hate her, you cannot deny that she is always interesting. Thats why you need to follow her on Instagram (@kate_chastain), Twitter (@Kate_Chastain), and Facebook (@BelowDeckChiefStew). Not only that, but you should also read Kate's book, Lucky Charming.

Kelley Johnson wasn't exactly a fan favorite during the second season, but he grew up and stepped up for Season 4 and become a beloved cast member. Now that Kelley is in good favor with the fandom, you should check out his photography on Instagram (@kelleywjohnson), read his Tweets (@KelleyWJohnson), and stay up-to-date with his Facebook updates (@KelleyWJohnson87).

I feel like we all miss seeing Amy Johnson on Below Deck. From her feud with Kate Chastain to their unexpected eventual friendship, fans adore Amy. Thankfully we can all see what she's been up to by checking out her tweets (@gypsy_homemaker), Instagrams (@gypsy_homemaker), and Facebook posts (@Amy-Johnson-1435731863354629).

Even though we've only had one season of Below Deck: Med, Season 2 is on the way and that means we get to see more of Bobby Giancola. If you can't wait until then, get your regular dose of Bobby on Instagram (@bgcola28), Twitter (@bgcola28), and Facebook (@thebobbygiancola).

Fans definitely miss Kat Held from the early seasons of the show. Unfortunately, her Twitter bio says that she is a "#retiredYACHTY" and a nursing student, so there's pretty much no chance of her returning, but then again it wouldn't hurt to have a nurse on the yacht. Thankfully, fans can see what her life is like these days via Twitter (@katostate), Instagram (@katostate), and Facebook (KatHeld.BelowDeck).

There's a good chance that you're annoyed at me for including Rocky Dakota in a list of favorites. Sure, she caused a lot of trouble, but she definitely made the show interesting and for that reason alone, I know she is missed. If you feel the same way I do then you need to follow her on Twitter (@raqueldakota) and Instagram (@raqueldakota).

If you are a Below Deck super fan and you can't get enough, then you need to go through this list and hit "follow."