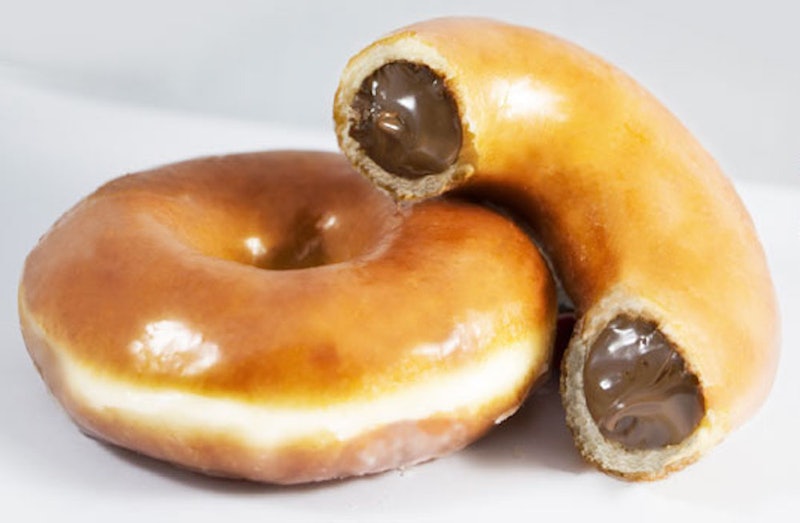 It's easy to feel bummed out on a Monday afternoon, especially when you're still exhausted thanks to springing forward for Daylight Saving Time. But we have some truly great news to kick off your week with a delicious start: Krispy Kreme, one of the best donut chains on Earth, now sells Nutella-filled donuts, and no, this is not a drill. The company that gave us pumpkin spice donuts for fall, green donuts for St. Patty's Day, and peanut butter donuts just because is back at it again. You can now eat two of your favorite things together. But, where can one get these Krispy Kreme Nutella-filled donuts?

You might think, "OK... I could just spread my own Nutella on a regular old donut if I wanted to. What's so special about this one?" I mean, sure — you could do that, and I'm sure it would be delicious. But this donut is extra special, because it's both the famous Krispy Kreme glazed donut, and then it's filled with Nutella. Filled with it!

I know, you're probably wondering where you can go right now to get one of these. Unfortunately, there's just one small catch... right now the donut is only available in the Dominican Republic. I know. You were ready to run out the door to your nearest Krispy Kreme to buy one, or a dozen, and now you can't (unless you live in the Dominican Republic). I'm sorry! I feel just as bummed out as you do.

The good news? If these really take off, there's always small chance that Krispy Kreme might make them available in more locations, including stores in the United States. I mean, as of now the chain doesn't seem to have any plans to expand the release of this Nutella donut, but hey — never say never, right?

The other thing to think is this: until you make it to the Dominican Republic, you can now basically make your own Nutella-filled Krispy Kreme donuts by buying some glazed donuts from the chain and dipping them in melted Nutella. Sure, your donuts won't be filled with Nutella like Krispy Kreme Dominican Republic's are (unless you're a master pastry chef who knows how to add Nutella to an already-baked Krispy Kreme donut), but I'm sure it'll hold you over for now.

And finally, you could also use this as an excuse to go to the Dominican Republic for spring break. Is buying a specific donut a good reason to spend a few hundred dollars on a plane ticket and hotel room? Yes. In my opinion, yes.

Twitter users are also freaking out about this latest development, and many are already begging the chain to bring the donuts to other locations. I mean, can you blame them? We're talking about Nutella-filled donuts here!

Some users were very into the idea of booking plane tickets to DR, simply to try the donuts... and maybe get some quality beach time in as well.

Other users feel as frustrated as we do about not being able to buy the donuts right now:

Honestly, these stages of emotions are very on point:

I am this GIF.

If you are now craving a Nutella-stuffed donut, I feel you. But hey — if there's a will, there's a way, right? I'm pretty confident you'll find a way to indulge in this craving. Plane tickets are only a click away! And then the Nutella-filled donuts are only a plane ride away. It's honestly not that out of reach.

Now, if you'll excuse me, I need to go wipe some of this drool off my laptop keyboard.