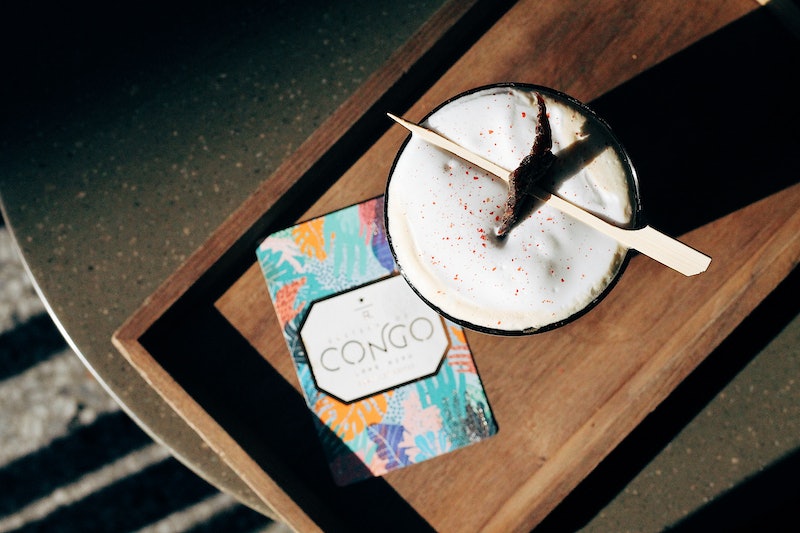 By now you're used to boundary-pushing drinks from Starbucks, but this latest concoction may make even the most adventurous coffee connoisseur take a second look. Starbucks' new coffee with beef jerky, dubbed "Pepper Nitro with a Jerky Twist," has officially been released at the coffee giant's Seattle Reserve Roastery location, and it actually sounds kind of amazing. Starbucks' latest drink was born from a 15-year partnership with Falcon Coffees, which helps cultivate relationships in coffee growing-regions around the world, including Starbucks’ latest small-lot coffee from the Eastern region of Democratic Republic of Congo, according to Heidi Peiper from Starbucks.

"I know of no tougher environments in the coffee world to work in," Falcon Coffees CEO Konrad Brits told Starbucks. "But these Reserve coffees demonstrate the potential of this region to produce truly specialty grade coffees. They show the coffee world that these coffees are worth investing in."

While this drink might not sound that appealing at first glance, trust me: after you read the description you might change your mind. According to Starbucks, Pepper Nitro with a Jerky Twist (which is, unfortunately, only available at the Seattle Reserve Roastery location) takes freshly ground Congo coffee, slow-steeped as cold brew and served on draft through a nitro tap, then infused with a sweet and savory malted fennel black pepper syrup. The beverage is then topped with a layer of honey cold foam, and finished with a sprinkling of cracked pink peppercorn and a bamboo skewer of natural beef jerky made with grass-fed beef. Um, yum!

The Magic Behind Starbucks' Pepper Nitro With A Jerky Twist

This savory new coffee delight was created with the help of Raegan Powell from the Starbucks R&D team. "Our inspiration was centered around the characteristics of the Congo coffee. The sweet and herbal spice notes naturally paired well with savory ingredients," Powell explained to Peiper.

"With the first sip, you get a hint of the honey cold foam and the aroma of the pink ground peppercorn. The real surprise is the salty savoriness of the jerky garnish, an exciting complement to the smooth and sweet finish of the nitro cold brew experience."

This coffee, which is also beautiful to look at as it is satisfying to drink, is a celebration of the growing coffee industry in the Democratic Republic of the Congo. While the DRC has some of the most fertile land in the world, and was once a prolific coffee producer, decades of war halted a thriving coffee industry and left farmers with no infrastructure to produce and sell coffee, according to Peiper.

"After a peace deal with rebel groups was signed in 2013, stability is growing in the once fragile area and determined smallholder farmers have banded into co-ops to build the trade. Lake Kivu, a massive freshwater lake along the Rwandan border, provides a natural ecosystem well-suited to the cultivation of heirloom Bourbon coffee trees."

You're probably really wanting a cuppa Pepper Nitro with a Jerky Twist right about now, but unfortunately, as aforementioned, this new drink is only available at Starbucks' Seattle Reserve Roastery — and only for a limited time. However, if you want to try Congo coffee, Starbucks Reserve D.R. Congo Kawa Kabuya is available online, and at 1,700 Starbucks stores in the U.S. and Canada, while supplies last. You can always buy your own jerky to put on top if you're having major FOMO.

Starbucks purchased its first crop from Congo in late 2014, and has since continued to buy coffee beans from the region as part of their work with the Eastern Congo Initiative to rebuild the country’s coffee industry. They have since showcased the region’s coffee with special limited-time offerings including Starbucks Reserve Gravitas, and Starbucks Reserve Eastern D.R. Congo Lake Kivu.