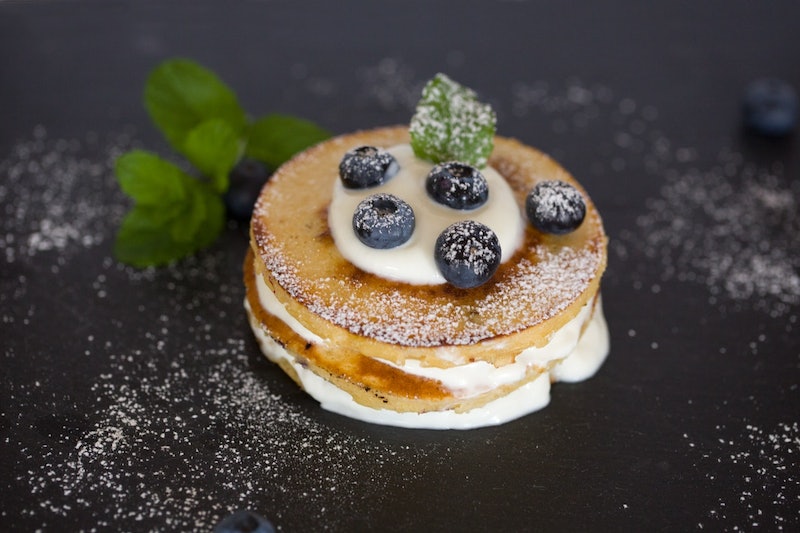 It's been a long hot summer, but thankfully putting ice cream on everything is all the rage. Personally, I think we could all use a little more ice cream in our lives, which is why I'm going to tell you where to get the funnel cake ice cream sandwiches everyone is talking about. If you're the kind of person who goes straight for the funnel cake stand at a carnival or fair, you're definitely going to want to try this dessert that dreams are made of.

Kristen Moorer, the executive pastry chef at American Cut, walked Refinery 29 through her process of creating the funnel cake ice cream sandwich, which is available during New York City restaurant week, and the rest of summer at American Cut's Tribeca location. Refinery 29's Zoe Bain noted that the steakhouse is mixing things up by making its own ice cream, and funnel cake flavors have run the gamut from Funfetti, Cracker Jack, and Brownie Chip. I mean, it only makes sense to put a carnival classic together with epic ice cream flavors like these. It's practically a crime not to.

So far this summer we've stumbled upon everything from ice-cream stuffed doughnuts to Mochi ice cream — a spoonful of ice cream wrapped in a delicate layer of soft and chewy mochi rice dough to make your ice cream dreams come true. So, of course funnel cake ice cream sandwiches are next.

Unfortunately, these delicious dessert treats are only available in NYC, but if you're on the left coast, Churro Borough in the Los Feliz neighborhood of Los Angeles has a Churro Ice Cream Sandwich. The Churro is similar to a funnel cake, and this dessert comes with a scoop of your favorite handmade, small-batch ice cream sandwiched between two freshly fried churro discs, and tossed in their house spiced sugar. Bonus, you might even run into Lauren Graham, or Angelina Jolie, both of whom are Los Feliz residents.

If you're having major FOMO right now, I've found some ways for you to make your own funnel cake ice cream sandwiches. And, if you're dairy free, gluten free, or both, you can still have some fun by making your own creation with some Mikey's Muffin tops and some coconut ice cream.

Funnel cakes have been around since Medieval times, and most cultures have some version of the funnel cake, which is basically a really delicious doughnut. In the Midwest, where I am from, we call funnel cakes "elephant ears." Whatever you call this sugary, delicious dough creation, step up your summer ice cream game with a funnel cake ice cream sandwich. Because, it's about time these two desserts came together for a hot, summer love fest.