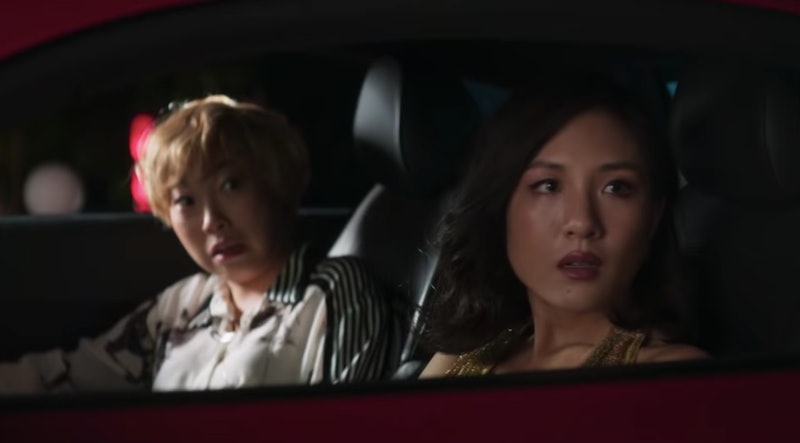 One of the best parts about awards season that it gives you an excuse to revisit some of your favorite movies that came out over the past year, including Crazy Rich Asians, which is nominated for Best Motion Picture in the Musical or Comedy category at the 2019 Golden Globe Awards, airing Jan. 6. Fortunately, you don't have to look far to find where to stream Crazy Rich Asians; a few different online sites have the hugely successful rom-com available to rent.

While you won't find Crazy Rich Asians on a streaming site that you might already have a subscription to, you can rent it on both Amazon Prime and iTunes for $5.99. For about half the price of a movie ticket, that seems like a good deal, especially considering that Crazy Rich Asians became the best-selling romantic comedy in years following its August release. During its first weekend at North American box offices, the film with an all-Asian cast raked in $25.2 million, Entertainment Weekly reports. What's $5.99 for a $25 million-dollar movie?

The movie, based on the novel by author Kevin Kwan, provided such an exciting win for Asian representation in Hollywood, the movie is bound to receive praise at the Golden Globes on Sunday regardless of whether it wins or not, too. Just imagine the red carpet shots.

Not only did Crazy Rich Asians get nominated for one of the Best Motion Picture categories, but it also earned its leading actor, Constance Wu, a nomination for Best Performance by an Actress in a Musical or Comedy. According to CBS News, Wu's nomination is the first awarded to an Asian woman in 50 years, so this is a pretty big deal, to say the least.

In an interview with The Hollywood Reporter, Wu, who plays Rachel Chu in Crazy Rich Asians, said, "For so long Asian-Americans have been in film and TV, but we've always been supporting another culture's story. We've never been leading our culture's story." Wu also stars in the hit TV show, Fresh Off the Boat, which tells another boundary-breaking story about an Asian family.

Wu's interview with THR about how meaningful Crazy Rich Asian's Golden Globes nominations are for the future of representation in film and TV echoes a lot of what her other cast members and the film's creative team have said about the film's impact on Hollywood. Awkwafina, who played the hilarious Peik Lin Goh told The Hollywood Reporter, "I watched Crazy Rich Asians and, not even at the sad parts, I cried. And I've watched Asian-American kids come out of screenings and they're crying."

Seeing how Crazy Rich Asians was such a huge success as the first major Hollywood movie that told a contemporary Asian storyline with a cast of all Asian actors since 1993's The Joy Luck Club, it's already a winner. If Crazy Rich Asian wins any of the awards at the Golden Globes on Jan. 6, the happy tears will likely flow all over again.