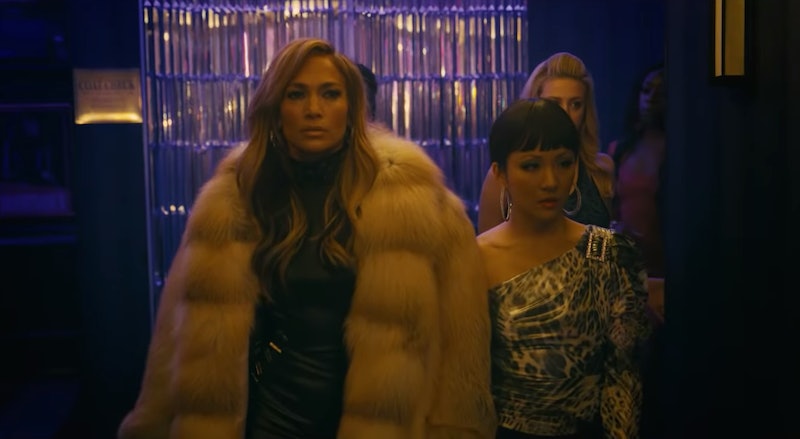 Though Jennifer Lopez's Oscar snub for her role in Hustlers was one of the most unforgivable oversights of the 2020 awards season — the film is still iconic, and well worth a watch. (For Jennifer Lopez's pole dancing alone.) While it's now out of theaters, the internet's got your back: you can stream Hustlers online, and we've got the skinny on where to do it.

Hustlers, which is based on a true story, follows a group of strippers who famously scammed a bunch of Wall Street suits out of their money. Ramona (Jennifer Lopez) is the de facto leader of the group, and is joined by Destiny (Constance Wu), Mercedes (Keke Palmer), and Annabelle (Lili Reinhart). Together, they work out a cash kickback scam that mostly involves drugging men, taking them to clubs, and using their credit cards and cash to pay for everything throughout the night — resulting in a big payday for the clubs and the group, who score a cut of the take. But Hustlers more than just a story of scam. It's about female friendships, and the unorthodox paths women will go down in order to survive.

If you missed out and want to see what all the buzz was about — the film opened to glowing reviews and made solid overall box office take of $156.6 million — you can stream Hustlers online over on Amazon (rentals, not Prime), Google Play, and iTunes. The one caveat, though, is that you'll have to pay for a rental at each of these sites. (Hustlers currently isn't available on any of the subscription-based streaming sites like Netflix, Hulu, or Prime Video.)

Right now, a rental on Amazon and Google Play will run you $4.99 for an HD viewing, while iTunes charges $5.99 for a 4K HD version. If you're looking to outright purchase the film, Google Play has it for $12.99, while Amazon and iTunes offer it for $14.99. The price differences are fairly minimal between the streaming options, so really, it's all about what service would be most convenient for you to use.

And once you're done streaming, there's plenty of reading to be done to supplement your viewing experience. As we mentioned, Hustlers is based on a real-life scam. New York magazine writer Jessica Pressler was the first person to crack the story in her feature, "The Hustlers at Scores," which told the near-mythic tale of Roselyn Keo and Samantha Barbash, two former strippers who scammed their clients. Ultimately, the women, who were joined by other accomplices Marsi Rosen and Karina Pascucci, were caught and sentenced for their crimes. Per Page Six, Barbash received five years probation, along with Keo, her partner-in-crime. Rosen and Pascucci received jail time, which they served during the weekend over a period of four months (in addition to probation time). Happy viewing and reading.