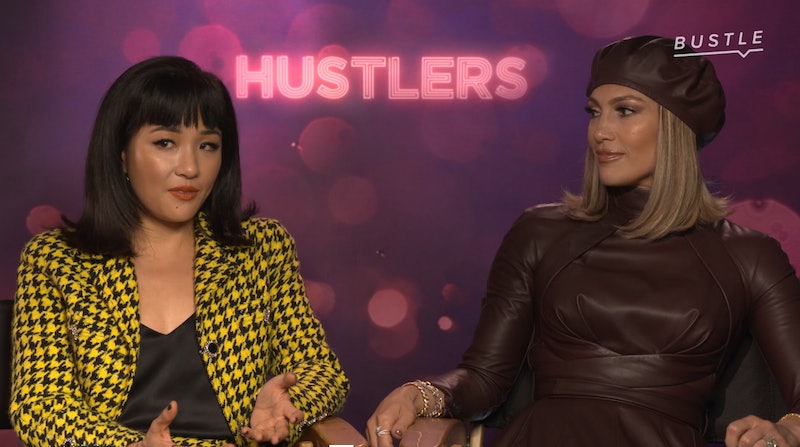 Sisterhood can develop anywhere, including — or maybe even especially — in a strip club. In the movie Hustlers, opening Sept. 13, Jennifer Lopez stars as a dancer named Ramona, who recruits her colleagues into a crime ring that not only keeps them in furs and handbags, but also ensures that they can support their families and, in Ramona's mind, balances the scales of justice. As they scam their Wall Street marks, the women of Hustlers form a bond that goes far beyond the scheme, which is what Bustle Entertainment Reporter Ivana Rihter talked to the cast about at the film's Los Angeles press junket.

Hustlers dramatizes the 2015 New York Magazine article titled "The Hustlers at Scores" by Jessica Pressler, with Julia Stiles as the journalist who's investigating the crime and the women's motivations. The group, which initially is the power foursome of Ramona, Destiny (Constance Wu), Mercedes (Keke Palmer) and Annabelle (Lili Reinhart) are able to do what they do because they see their marks as men who have it all and keep it from everyone else. "Those Wall St. guys, you see what they did to this country?" Ramona says in the trailer. "They stole from everybody. Hard working people lost everything. And not one of these douchebags went to jail." But they're also motivated by their loyalty to each other and their desire to be self-sufficient and completely independent.

Throughout the scamming, stealing, and scandalous nature of their quest, the women of Hustlers stick together. "We're a family now," Ramona says to her fellow thieves, "a family with money!"

Whether they're fighting the patriarchy or simply fighting for what they deserve, sisterhood is a major theme in Hustlers. And even in a large ensemble cast that also includes Lizzo, Trace Lysette, and Cardi B, each character is fully fleshed out and real. The film doesn't judge strippers, nor does it define them by their job.

"I just want [audiences] to care about them as people and not just think of them as their occupation," Wu tells Bustle.

"They're flawed human beings," Lopez adds, highlighting that we shouldn't need female characters to be perfect in order to root for them.

Keke Palmer's Mercedes is saving much of the money she's making through the scam to pay for her boyfriend's legal fees. "[Hustlers] is about friendship and it's about survival. It's about trying to find our way out of this rat race that we call life and money making," she says.

Writer and director Lorene Scafaria was initially drawn to the New York Magazine story because she finds the world of stripping to be so mysterious. But, she explains, "At the heart of it I just thought that there's a beautiful friendship story here and I really wanted to tell that story of friendship and sisterhood."

The con can't last forever, but there's a chance that the relationships can. As Lopez notes, these women see something in each other that they admire and a unique bond forms. And even in these circumstances, women teaming up with other women in order to get what they want is a power move.

More like this
On 'The Handmaid’s Tale,' Christine Ko Fights Back
By Gretchen Smail
Jinkx Monsoon Is About To Get Real Sketchy
By Sam Ramsden
The New Bachelor Will Be Announced Next Week & Here Are The Top Contenders
By Grace Wehniainen
An Extremely Messy Ranking Of What Actually Happens In 'Don't Worry Darling'
By Chloe Foussianes
Get Even More From Bustle — Sign Up For The Newsletter