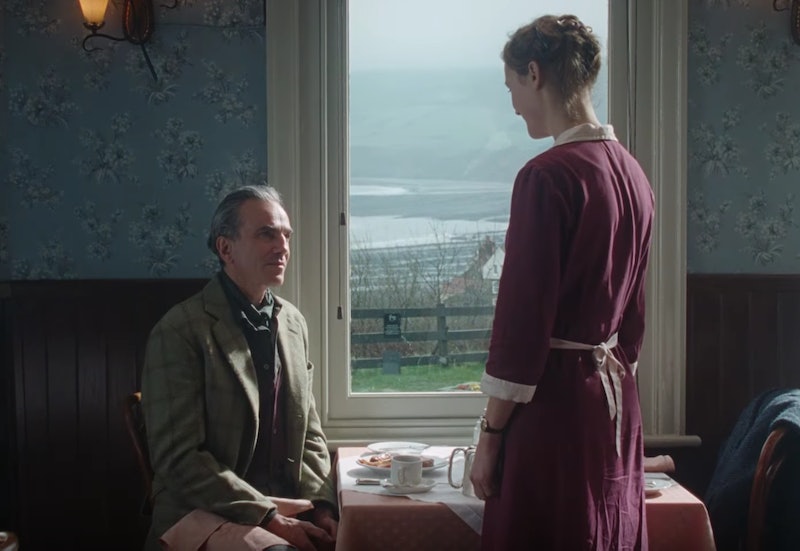 In the countdown to the 2018 Oscars, a few movie have risen to the top of everyone's must-watch lists. Phantom Thread (producer: JoAnne Sellar) is one of those, as it has a few nominations, including Best Picture, Best Actor in a Leading Role (for Daniel Day-Lewis), Best Actress in a Supporting Role (for Lesley Manville), and Best Director (Paul Thomas Anderson). It could make a clean sweep on March 4, so to prepare you might want to find out where Phantom Thread is streaming online.

Unfortunately, since the fashionable film had its wide release on Dec. 25, 2017, it hasn't been out of theaters long enough for it to be available for streaming. This is one of the greatest ironies of awards season, as everyone probably wants to stream the Oscar-nominated films, but since many of them came out this past winter, some are only available for pre-order online. A few other Oscar-nominated movies, like I, Tonya (editor: Tatiana S. Riegel) and The Post (producer: Amy Pascal), came out too recently for you to find them online now.

Before you start crying over missing your chance to see Day-Lewis play a consummate dressmaker, make sure to check with your local movie theaters to see if Phantom Thread is still playing. Certain theaters might even have special showings of the movies nominated for Best Picture, so you might have hope yet.

If you were hoping to catch up on all of the Oscar nominated movies from the comfort of your home, it might be worth taking a trip to the movie theater, especially to see Phantom Thread. The Paul Thomas Anderson film includes stunning visuals of gorgeous dresses paired with the idyllic settings of 1950s London and a seaside city in Yorkshire. Those features alone make the movie worth watching, but the story of a young woman (played by Vicky Krieps) who refuses to let the dress designer use her as carelessly as he has his past muses also makes Phantom Thread a great watch.

Additionally, Phantom Thread has an amazing score composed by Johnny Greenwood, the guitarist from Radiohead. The soundtrack earned Greenwood a nomination for Best Original Score at the 2018 Oscars, and even if that's not a category you usually care about, once you watch Phantom Thread you might change your tune — no pun intended. And don't even talk about the fashion shown in Phantom Thread, because it might just be the best part of the film.

If a fashion-focused movie is what you're looking for, then you have some other streaming options to watch while you wait for Phantom Thread to become available online. Netflix has the movie Dior and I (executive producer: Juliette Lambours) available for streaming now, and even though the documentary doesn't quite have the same story as Phantom Thread, it still shows a behind-the-scenes look at a coveted clothing designer's life. Netflix also has the fashion documentaries The First Monday in May (co-producer: Tracy Aftergood) and Jeremy Scott: The People's Designer (associate producer: Natalie Romero).

If you're looking for a movie that has a story akin to Phantom Thread, you might want to check out The Bitter Tears of Petra von Kant (editor: Thea Eymèsz), which is available to rent or buy on Amazon. The Bitter Tears is a German film set in the fashion designers apartment and it explores the relationship between the designer named Petra von Kant, and two other women who work for her. Think of it as the all-female version of Phantom Thread set in 1970s Germany. It's pretty different, but it explores the relationship between a designer and model in an interesting way, just like Phantom Thread.

If the fact that Phantom Thread is a major Oscar contender is what draws you to it the most, you can find other Best Picture nominees to stream before the March 4 showdown. Lady Bird (director: Grets Gerwig), Three Billboards Outside of Ebbing, Missouri (executive producer: Rose Garnet), Dunkirk (producer: Emma Thomas), Call Me By Your Name (executive producer: Naima Abed), and Darkest Hour (producer: Lisa Bruce) are all available to purchase and watch on Amazon. Another Best Picture nominee, Get Out (co-producer: Marcei Brown), can be found on HBO Go, so you're pretty much set for the Oscars.

Whether you watch Phantom Thread online once it's available later or in a special pre-Oscars theater showing, the movie that's nominated for six awards will not disappoint you. Perhaps it will even spark your interest in other films like Dior and I and The Bitter Tears of Petra von Kant.

More like this
Remember When Benedict Cumberbatch Announced His Engagement In A Newspaper Ad?
By Hugh McIntyre
The 'Hocus Pocus' Sequel Finally Has A Release Date & It Makes Total Sense
By Shannon Barbour and Radhika Menon
What Does Doctor Strange’s Third Eye Mean?
By Arya Roshanian
9 Films About Mental Health To Watch On Netflix UK
By L'Oréal Blackett and Sophie McEvoy
Get Even More From Bustle — Sign Up For The Newsletter