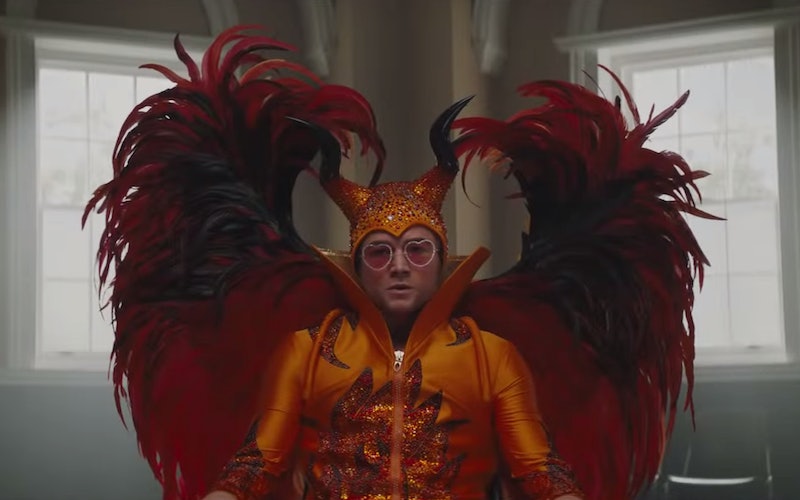 Some of the biggest wins at this year's Golden Globes went to television shows, films, and stars from the U.K., not the least of which being Taron Egerton winning Best Actor in a Motion Picture — Musical or Comedy. The nomination was for his portrayal of Sir Elton John in Rocketman, a biopic based on the singer's life. The competition was stiff, to be sure, but Egerton's performance in Rocketman made that film truly sing. But if you missed catching it in theaters, there are a few places where you can stream Rocketman right this very moment, so you can see what all the hype is about for yourself — or perhaps just relive the greatest moments of the film if you've already seen it.

To be more specific, there are a few places you can rent Rocketman to stream, as no subscription-based streaming services like Netflix, Hulu, or Prime Video offer it just yet. But Amazon, YouTube Movies, Google Play, and iTunes Movies all have it available for rent, ranging from $4.99 to $5.99 per rental. Naturally, each of those services also has it available for purchase, with the prices averaging $10 higher, bringing them each to $14.99 to $15.99 per purchase.

It wasn't just Egerton who brought home the gold for Rocketman, either. Sir Elton John also won for Best Original Song, "I'm Gonna Love Me Again." He was up against Beyoncé's "Spirit," from The Lion King, Taylor Swift and Andrew Lloyd Weber's "Beautiful Ghosts," from Cats, Kristen Anderson-Lopez and Robert Lopez's "Into the Unknown" from Frozen II, and Cynthia Erivo's "Stand Up" from Harriet. Again, an extremely tough competition, but John and Rocketman managed to win out.

Of course, John didn't do it alone, as he created "I'm Gonna Love Me Again" with his longtime collaborator Bernie Taupin. Ahead of the show, John spoke with Variety about his feelings regarding the nomination, saying, "I'm very happy because I'm nominated with Bernie. I never get nominated with Bernie for anything. That makes it very special." John went on to comment on Egerton's performance, saying, "No one worked harder than Taron."

Egerton was up against some other really big names in his Golden Globes category, including Daniel Craig for his role as Benoit Blanc in Knives Out, Leonardo DiCaprio for his role as Rick Dalton in Once Upon a Time... in Hollywood, Eddie Murphy for his role as Rudy Ray Moore in Dolemite Is My Name, and Roman Griffin Davis for his role as Jojo in Jojo Rabbit.

Each of their performances is certainly worth a watch as well, though it'll be a bit more difficult to do so, as only two of the four films are available for streaming. Once Upon a Time... in Hollywood is available on the same platforms Rocketman is on (Amazon, YouTube Movies, Google Play, and iTunes Movies) for the same prices, while Dolemite Is My Name is available on Netflix. Knives Out and Jojo Rabbit are still making their rounds in theaters, though they should be making their way to steaming services sometime soon.

More like this
Reese Witherspoon Confirms This Fan Favorite Will Return For 'Legally Blonde 3'
By Jake Viswanath
What Is Mary J. Blige’s Net Worth? The 9-Time Grammy Winner Is Doing “Just Fine”
By Hugh McIntyre
Taylor Lautner Copped To Finding Jacob "A Little Annoying" In Twilight
By Stephanie Topacio Long
James Cameron May Come To Regret His 'Titanic' Door Experiment
By Stephanie Topacio Long
Get Even More From Bustle — Sign Up For The Newsletter
From hair trends to relationship advice, our daily newsletter has everything you need to sound like a person who’s on TikTok, even if you aren’t.