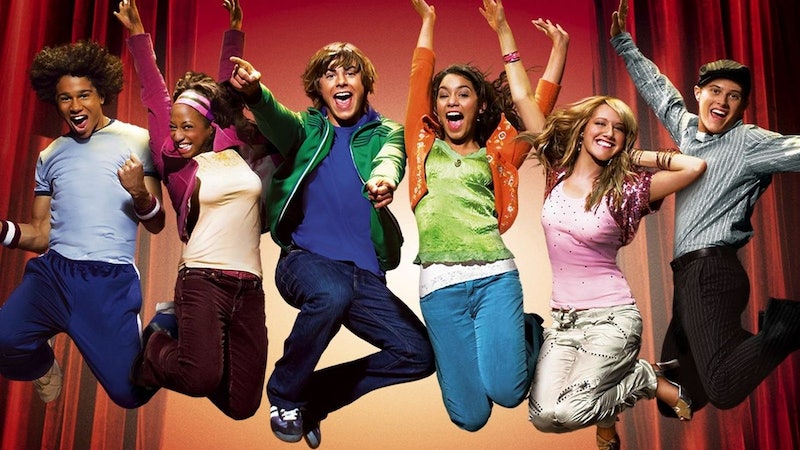 If you needed an excuse to stream the High School Musical movies for the 20th time, now's your chance. Disney+ debuts its spinoff of the mid-2000s film series (the infuriatingly titled High School Musical: The Musical: The Series) on Nov. 12. So whether you're a new viewer or a longtime fan, it's the perfect time to revisit the original franchise.

The catch? It's going to cost you. Though all three movies — which starred Zac Efron and Vanessa Hudgens as star-crossed high school sweethearts Troy Bolton and Gabriella Montez — are available to watch on Amazon Prime, Google Play, iTunes, and YouTube, you'll have to rent or buy them. All three movies are also available on Blu-Ray and DVD, though the prices are considerably higher in comparison to streaming or buying digital files. But hey, it's gotta be worth it for a franchise so popular that Disney's Chief Creative Officer Gary Marsh told Deadline it's "part of [the company's] DNA."

Besides, while none of the original High School Musical actors are in the Disney+ spinoff, it would be helpful to refresh your memory about what happened in the movies before watching. In the show's meta universe, as in real life, Troy and Gabriella aren't real people, but characters in the film franchise. The movies (again, as in real life) were shot at East High School in Salt Lake City, Utah, where the Disney+ spinoff takes place. The school's drama teacher Miss Jenn (Kate Reinders) decides to stage a musical version of the original film, and the show follows students as they audition and gear up for the play — namely exes Nini Salazar-Roberts (Olivia Rodrigo) and Ricky Bowen (Joshua Bassett), who are cast as Gabriella and Troy.

Think of it like High School Musical for the next generation — a story its stars are thrilled to bring back to life.

"High School Musical is such a big part of our generation's upbringing so it's really great to be a part of a project that pays homage to that," Olivia Rodrigo, who plays Nini in the series, said during a panel at the D23 Expo in August. "It's really exciting to be a part of that franchise."

More like this
At 28, Rosie Perez Risked Her Career To Stop Playing Stereotypes
By Gabrielle Bondi
Here’s Everything Coming To & Leaving Netflix In February
By Jake Viswanath
'Boiling Point's TV Sequel Is Set To Deliver A “Rollercoaster Of Emotions”
By Catharina Cheung and Sophie McEvoy
What Is Mary J. Blige’s Net Worth? The 9-Time Grammy Winner Is Doing “Just Fine”
By Hugh McIntyre
Get Even More From Bustle — Sign Up For The Newsletter
From hair trends to relationship advice, our daily newsletter has everything you need to sound like a person who’s on TikTok, even if you aren’t.