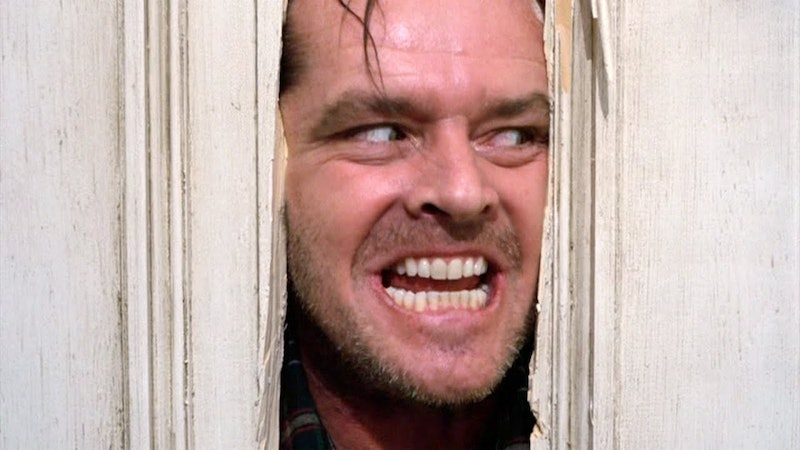 If you're a fan of horror films, movie adaptations of Stephen King's novels, or of Stanley Kubrick, you've definitely seen the 1980 classic The Shining more than once. But this fall is the best time to rewatch the freaky film (or discover it for the first time), because The Shining sequel Doctor Sleep is coming to theaters Nov. 8. The new movie, based on King's 2013 followup novel, continues the story of Danny Torrance (Ewan McGregor), who's still running away from the ghosts that haunt the Overlook Hotel... and the memory of his father. The callbacks will be more than just Easter eggs, so you'll need to know where to stream The Shining before hitting theaters for this new entry into the canon.

Fortunately, you have quite a few options. With a subscription, you can stream it on fuboTV for no additional cost. It's available to rent on Amazon, Vudu, iTunes, Google Play, YouTube, Redbox, and a few other services. You can also purchase the film, though it'll obviously cost you more.

Now a horror classic, The Shining stars Jack Nicholson as Jack Torrance, an aspiring writer who takes a job as the winter caretaker of the Overlook Hotel in the Rocky Mountains of Colorado. He hopes to use the isolation to write his novel, but the Overlook, and the ghosts that reside within, have other plans. Jack becomes possessed by the spirits of the hotel and torments his wife Wendy (Shelley Duvall) and son Danny (Danny Lloyd). In Doctor Sleep, McGregor stars as Danny Torrance all grown up, battling alcoholism, and still dealing with the aftermath of his experience at the Overlook. You wouldn't be able to forget it easily either.

The trailer for Doctor Sleep features a lot of imagery from Kubrick's original film, including the Overlook Hotel's geometric carpeting, the infamous Room 237, the spooky Grady Twins, and a sea of blood pouring out of a set of elevators. Kubrick's film, however, does make a number of changes to King's 1977 novel — most notably it's explosive ending — and King himself has never been a huge fan of it.

Per Yahoo, at a press event, Doctor Sleep filmmaker Mike Flanagan was asked whether the movie is more loyal to King's books or to The Shining movie. "It is an adaptation of the novel Doctor Sleep, which is Stephen King's sequel to his novel The Shining," he said. "But this also exists very much in the same cinematic universe that Kubrick established in his adaptation of The Shining. And reconciling those at times very different sources has been the most challenging and most thrilling part of this for us."

If you like Kubrick's version of The Shining but are interested in seeing an adaptation of The Shining that's a bit closer to the events of the novel, there was a television miniseries made back in 1997 starring Steven Weber, Rebecca De Mornay, and Courtland Mead that's more faithful. It's only available on DVD at the moment, but since it's a miniseries it does go more in-depth, even if it wasn't that well received at the time.

Or, if you want to dive further into Kubrick's vision, the 2012 documentary Room 237 explores the possible hidden meanings within the film, as well as the spooky conspiracy theories and bizarre interpretations that have popped up over the years, such as the theory that The Shining is actually about Native American genocide and another about the Holocaust. Kubrick's frequent collaborating producer Jan Harlan has called the doc "idiotic" and "dumb," but it's still a wild watch and an interesting addition to the still-growing universe of The Shining. Room 237 is available to rent on Amazon, iTunes, YouTube, and Google Play.

Whether you're enough of a fan to dig in further or not, Kubrick's The Shining is a must-watch before Doctor Sleep.

More like this
What Is Mary J. Blige’s Net Worth? The 9-Time Grammy Winner Is Doing “Just Fine”
By Hugh McIntyre
Taylor Lautner Copped To Finding Jacob "A Little Annoying" In Twilight
By Stephanie Topacio Long
James Cameron May Come To Regret His 'Titanic' Door Experiment
By Stephanie Topacio Long
Kukulkan From 'Wakanda Forever' Has A Surprising Connection To Marvel History
By Grace Wehniainen
Get Even More From Bustle — Sign Up For The Newsletter
From hair trends to relationship advice, our daily newsletter has everything you need to sound like a person who’s on TikTok, even if you aren’t.