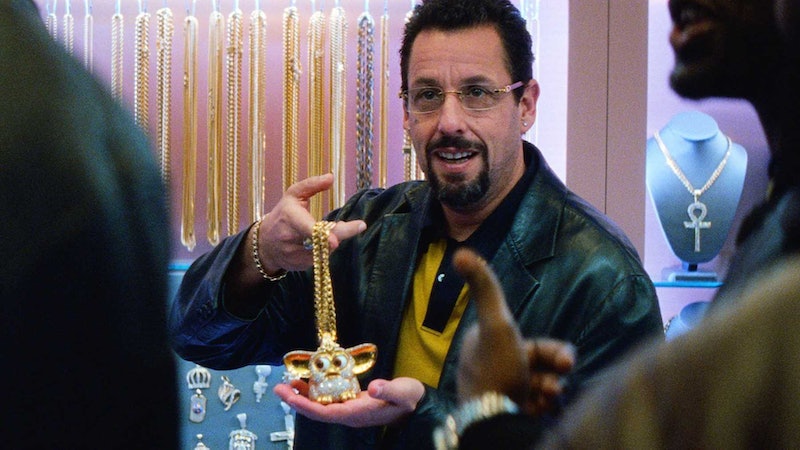 Adam Sandler received near-universal critical acclaim for his role as Diamond District hustler Howard Ratner in Uncut Gems. But when it came time for the Oscars, Sandler wasn't in the running. The film's snub was considered an upset, but one that didn't stop die-hards from raving about the film. If you're curious about the sure-to-be cult classic, here's where to stream Uncut Gems.

The film is available to buy from Apple+, Amazon Prime, FandangoNow, Vudu, Redbox, and Microsoft. It's also currently slated for digital rental the same day of its Blu Ray and DVD release — March 10, 2020, though you can preorder the disc now off Amazon. The bad news is the Safdie Brothers' latest likely won't be available for free until later on this year.

But if you need that adrenaline rush of classic Safdie high-tension, rapid-fire New York crime story, some good news: one of their earlier films, Good Time, is available to stream on Netflix right now.

Good Time stars Robert Pattinson as grimy small time crook Connie Nikas, who runs all over the city to try to spring his brother, Nick (Benny Safdie), from jail. Like Sandler's character, Connie deals with some severely shady characters and repeatedly puts himself in hot water — all while believing he has everything under control. Both films offer a gripping look at the underworld of New York City, a soundtrack by Oneohtrix Point Never (aka Daniel Lopatin), and charismatic troublemakers as leading men.

If you're sold, start off by watching Good Time on Netflix, then follow it up with purchasing the Safdies' latest critical darling: Uncut Gems.

More like this
How To Stream 'White Noise' On Netflix
By Grace Wehniainen
You Can Finally Stream 'Ticket To Paradise' At Home
By Chloe Foussianes
The 'Love, Lizzo' Harry Styles Scene Is Just 1 Moment That Made Fans Feel Seen
By Brad Witter
How To Stream Knives Out 2: When Will Glass Onion Be On Netflix?
By Radhika Menon
Get Even More From Bustle — Sign Up For The Newsletter