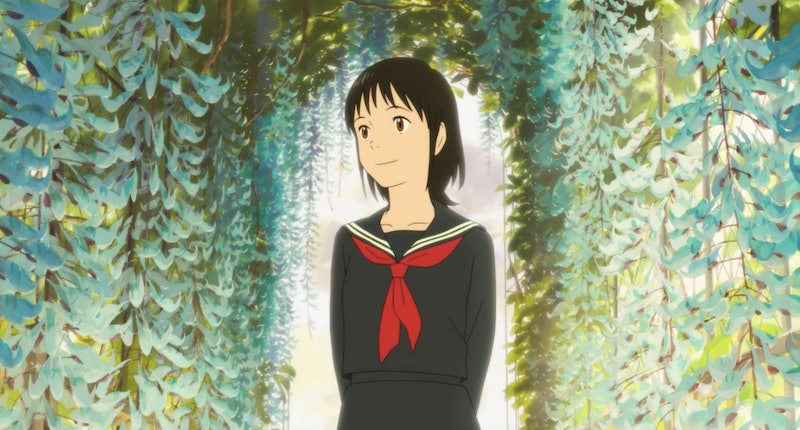 For culture vultures, a new year usually means one thing only, and that's the start of awards season. Kicking off 2019's lineup of awards shows is the 76th annual Golden Globe Awards, airing Sunday, Jan. 6. While it might not be possible to watch all of the movies and TV shows nominated this year, you can try to catch at least some of the nominees, like the Japanese anime movie Mirai, up for Best Animated Film. But finding out where to watch Mirai isn't the easiest task since the movie came out in U.S. theaters on Nov. 30, and is not yet available for streaming.

If you want to catch Mirai in theaters, the film's website indicates that it's still playing in numerous movie theaters around North America. If you live in San Francisco, Oakland, Malibu, Tucson, Brooklyn, Salem, Winston-Salem, or Canada, you can still find Mirai playing near you. If you're in the middle of the U.S., it seems like you're out of luck. But don't worry too much, because the anime film will likely become available for streaming in a few months.

You can also catch most of the other movies nominated for Best Animated Film, either in theaters still or on demand. Those nominees include Incredibles 2, Isle of Dogs, Ralph Breaks the Internet, and Spider-Man: Into the Spider-Verse.

So maybe you won't get to see Mirai before Sunday's ceremony, but you should definitely check it out eventually. The fact that Mirai has been nominated for a Golden Globe Award marks an exciting event for the genre in general, as it's not every year that Japanese-made films get nominated for U.S. awards shows. According to Anime News Network, the last time that an anime film was nominated for a Golden Globe was in 2014, and it was up for Best Foreign Language Film.

The nominated film in '14 was The Wind Rises, from Studio Ghibli's Hayao Miyazaki. Later in 2014, Variety reported that the Hollywood Foreign Press Association changed its rules so that any animated film in a foreign language, like The Wind Rises — and Mirai — must compete in the Best Animated Film category at the Golden Globes. Now, Mirai is the first foreign language anime film (though it's also dubbed in English) to receive a Globes nomination since the 2014 rule changed, Anime News Network confirmed.

According to Cartoon Brew, this is the first time that an animated film from Japan is nominated in the Best Animated Film category (rather than Best Foreign Language Film.)

Mirai tells the story of a young boy named Kun who becomes jealous when his parents have a new baby, a girl named Mirai. Then, by a magical twist of fate, an older version of Mirai from the meets Kun, and the two siblings go on an unexpected adventure together.

Even if Mirai takes a road trip to go see in theaters, it could be worth it. This anime movie has already made Golden Globes history.