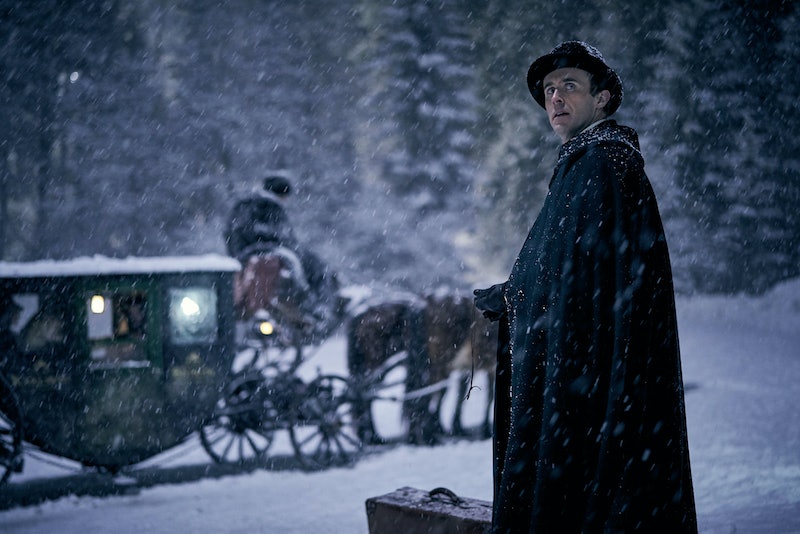 Bram Stoker’s classic Dracula has been retold countless times, but never like this. A new adaptation by Sherlock’s Steven Moffatt and Mark Gatiss, the three-part BBC series takes the horror of the undead being to another level, with Danish actor Claes Bang as the titular Count. And if you thought the story has been modernised like Sherlock, think again. So where was Dracula filmed, and how did Moffatt and Gattiss recreate a 1800s Transylvania?

For one, filming didn’t actually take place in the story’s setting. Instead, the production utilised locations “in the UK and Eastern Europe,” as iNews writes, which included Orava Castle in northern Slovakia being used as Dracula’s home. His castle has always been fictional, and in the novel, it’s never named.

Bran Castle in Translyvania has become a popular tourist attraction and known as ‘Dracula’s Castle’ as it’s believed Vlad the Impaler “may have spent a night or two” there, as the National Geographic writes. Dracula was loosely based “on this historical 15th-century prince”, but the writer thee vampire’s abode was not inspired by this particular castle.

That’s not to say there isn’t a link between Dracula and Orava Castle, as the 1922 horror Nosferatu was filmed here. The German Expressionist film is an unauthorised adaptation of Stoker’s story, which attempted to get around copyright law by changing the vampire’s name to Count Orlok alongside the plot receiving “many tweaks and modifications,” as Plagiarism Today writes.

Henley Road Cemetry in Caversham was also used, with shooting taking place there over three nights in July this year. However, it wasn't without controversy, as BBC News reports that relatives of those buried in the cemetery found it “totally disrespectful”, and the film company issued an apology to those affected.

Filming also took place at the legendary Bray Film Studios in Maidenhead, which used to be “the home of Hammer Film Productions between 1952 and 1966,” as iNews reports.

One of the most famous portrayals of the horror icon was by Christopher Lee in 1958’s Horror Of Dracula, which was produced by Hammer Films. The film was instrumental in laying out “the groundwork for a whole industry of horror franchises that followed,” as Hammer Films writes, and set the genre on the course it continues to be on today.

“This wonderfully atmospheric and legendary studio gave birth to so many monsters and stars — most memorably Peter Cushing and Christopher Lee,” Gatiss added. “As we watch Transylvania once again rise on the sound stages of Bray, it’s amazing to be able to say that Count Dracula has finally come home.”

More like this
'The Catch' Revisits A Famed Irish Filming Spot From 'The Tudors'
By Darshita Goyal
This First Look At 'The Gold' Shows Jack Lowden In A Whole New Light
By El Hunt and Sam Ramsden
Con O'Neill Was Connected With Sarah Lancashire Long Before 'Happy Valley'
By El Hunt
'Bridgerton' S3 Will Show A *Very* Different Side To Kanthony
By Sam Ramsden
Get The Very Best Of Bustle/UK
Sign up for Bustle UK's twice-weekly newsletter, featuring the latest must-watch TV, moving personal stories, and expert advice on the hottest viral buys.