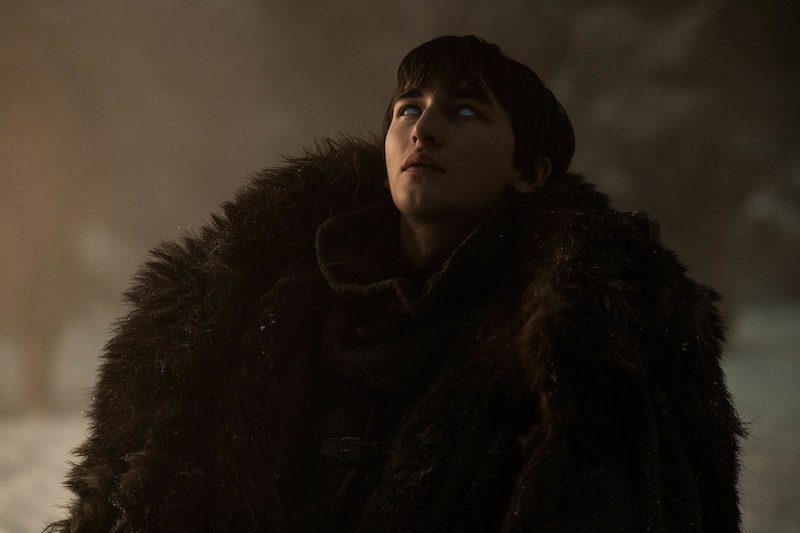 As Bran (Isaac Hemstead-Wright) revealed in the last episode, the Night King considers the Three-Eyed Raven to be one of his highest priorities in battle, as he knows the entire history of Westeros, and thus, will be able to keep the lore alive even if he achieved his goal of destroying the Seven Kingdoms. Though he wasn't sure if he'd be able to take down the Night King on his own, Bran knew that he wouldn't be able to resist coming after him, especially if he sat in the open, away from the fighting and under the Weirwood Tree.

Since he was so far away from the thick of the battle, Bran used his ability to warg in order to check in on the Night King's progress in his assault on Winterfell, as well as to lure him closer to the Weirwood Tree, as was his plan. While he waited with Theon (Alfie Allen), who had sworn to protect him during the fight, Bran mysteriously told Theon "I'm going to go now," before warging into a flock of crows that flew over the battlefield, and found out exactly where the Night King and the Army of the Dead were at that moment.

While it seemed as if Bran used his ability to warg in order to lure the Night King to where he was waiting, he might not have needed to; after all, the pair are connected to one another, and as such, the Night King is always aware of where the Three-Eyed Raven is at any moment in time.

In Season 6, Bran was marked by the Night King, during a solo vision in which he first came face to face with the leader of the undead army. During a moment of vulnerability, the Night King was able to touch Bran, and thus, mark him in a way that kept them connected — and also seemed to signal that Bran was not long for this world.

In addition to giving him a (literal) bird's eye view of where the Night King is at any give time, Bran's ability to warg has had a major impact on the events of Game of Thrones, both tragic and mysterious. And his ability to possess the mind of any creature that he comes across could mean that he has the power to end the war for the Iron Throne when all is said and done. After all, he saw the Mad King, Aerys Targaryen, go insane with power when he possessed the throne, and with another Targaryen ready to take over King's Landing, his knowledge of the entire history of Westeros could come in handy when the dust settles.

There may have only been a small bit of Bran's warging in the Battle of Winterfell — which was slightly disappointing to those who thought his role as the Three-Eyed Raven would play a much more prominent tole in the fighting — but it's clear that Bran's abilities will continue to be a major factor in the fight for the Iron Throne.