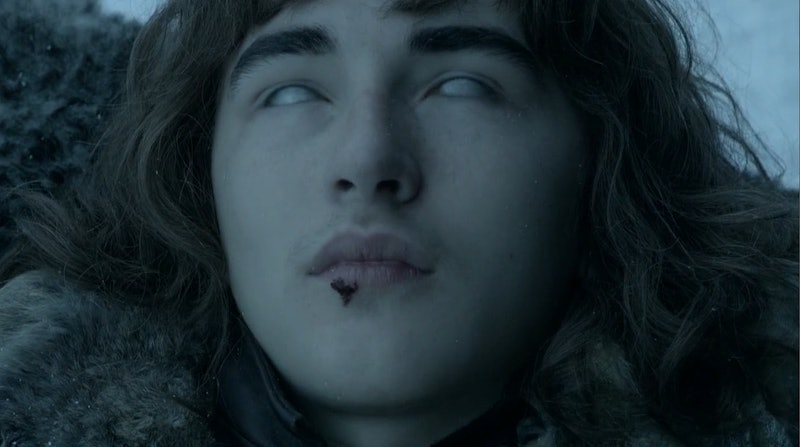 A Song of Ice and Fire readers know that at least half of the Stark siblings are wargs, but, having seen only Bran, Game of Thrones viewers might be a little iffy on the specifics. Now, the effects of Bran Stark's warging powers in the HBO series' latest season have been explained in a video from Vox. Major spoilers for the show, and possibly the books, lie ahead.

After showing us nothing of Bran, Hodor, and Meera last season, Game of Thrones Season Six has focused much of its attention on Bran's training with the Three-Eyed Raven, Brynden Rivers. The Raven takes Bran back in time, to observe Winterfell during Ned Stark's youth. Bran sees his aunt, Lyanna Stark, whose kidnapping and death served as a catalyst for Robert's Rebellion, as well as a freely speaking, young Hodor, then known as Wyllis.

The Raven then takes Bran to Dorne, in a scene that appears to confirm the R+L=J+M fan theory. Accompanied by Howland Reed — father of Meera and the now-deceased Jojen — Ned fights off the Kingsgaurd that surround the Tower of Joy, where Prince Rhaegar Targaryen is holding Lyanna. We hear her screams from inside, but as Ned races off to save his sister, Bran calls out behind him — and he turns around. This is the first time Game of Thrones shows that Bran's warging powers might be able to change the past.

Later, when he and Meera must flee the White Walkers who have come to kill them, Bran wargs into Hodor to use him as a weapon. Once they're out in the open, Meera commands Hodor to "hold the door" against the North-of-the-Wall terrors, so that she and Bran can escape. Unfortunately, Bran has slipped back in time to Winterfell, which creates a link between Hodor — being torn apart by wights — and Wyllis. Confronted, presumably, with the scene of his own demise, Wyllis has a seizure and begins shouting "hold the door," over and over again, until it becomes "hodor."

That scene, though completely and utterly enraging — seriously, how do you kill off such a beautiful cinnamon roll? — revived an older fan theory about Bran Stark's place in the A Song of Ice and Fire narrative. The original theory has Bran living in an alternate version of Westeros, one overrun by White Walkers. In this universe, Jaime Lannister never pushed Bran out of the window, and Westeros can only survive the White Walkers' attack if Bran is paralyzed. So, Future Bran wargs into Jaime and effectively paralyzes himself.

Although a little far-fetched, that theory bears a striking resemblance to fans' current questions about Bran, namely: could he be the most important person in Game of Thrones?

So here's how the most recent Bran Stark fan theory goes. If Bran can influence the past — which, as we've seen with Hodor/Wyllis, he can — then which other events in the timeline is he responsible for? New theories cast him as the voices in the Mad King's head and/or a younger version of the Three-Eyed Raven.

Because Bran can warg into humans, there's the added possibility that Bran Stark might actually be any or all of the famous Brandons in the North's history, including Bran the Builder, the man responsible for the Wall. That fan theory has been around for a while, but it has been getting more play since "The Door" confirmed that Bran can do a lot more than just observe the past.

Of course, some folks also think Bran might be Azor Ahai, the Prince That Was Promised. You know, the guy Melisandre is always looking for.

OK, so Bran Stark might be a lot more important to the story than we ever thought, but how, exactly, do his time travel powers work, and what kind of effects might they have on the history of Westeros? To unpack this, let's take a look at Vox's video on the subject.

In the real world, the possibility of time travel into the past has been pretty much debunked, although traveling at rates approaching the speed of light could make fast-forwarding into the future possible, if impractical. Still, we do have theories about how traveling to, and interacting with, the past would work.

There are three basic models for time travel: the Multiverse, the Dynamic Timeline, and the Fixed Timeline. You can watch the video above to find out more about each of these, but we're going to focus on the Fixed Timeline, because that appears to be the model Game of Thrones is using with Bran's warging powers.

In a Fixed Timeline model of time travel, it's impossible to create a paradox — that is, to change something in the past that would make it impossible for you to travel back in time in the first place. Anyone traveling within a Fixed Timeline cannot alter the past, because they come from the future created as a result of those events, and any paradoxes they might create would resolve themselves.

Killing your grandfather is a popular example paradox for the Fixed Timeline model. In a 2001 episode of Futurama, Fry inadvertently kills his grandfather, then proceeds to sleep with his grandmother, mistakenly believing that he was wrong about their genetic relationship. Unfortunately, she really is his grandmother, and the paradox he might have created by killing her husband has resolved itself by making Fry become his own grandfather.

The Harry Potter series also featured a Fixed Timeline. In Harry Potter and the Prisoner of Azkaban, Harry believes his father saves him from the Dementors, despite the fact that James Potter has been dead for more than a decade. Later, when Harry travels back in time to save Buckbeak and Sirius Black, he learns that he is the one who casts the Patronus Charm to save the near-past version of himself from the Azkaban guards.

At this point, it appears that Bran's powers do have some effect on the overarching story, but, as the Three-Eyed Raven tells him, "The past is already written. The ink is dry." Everything Bran does in the past simply sets in motion events that have already happened in Westeros' history.