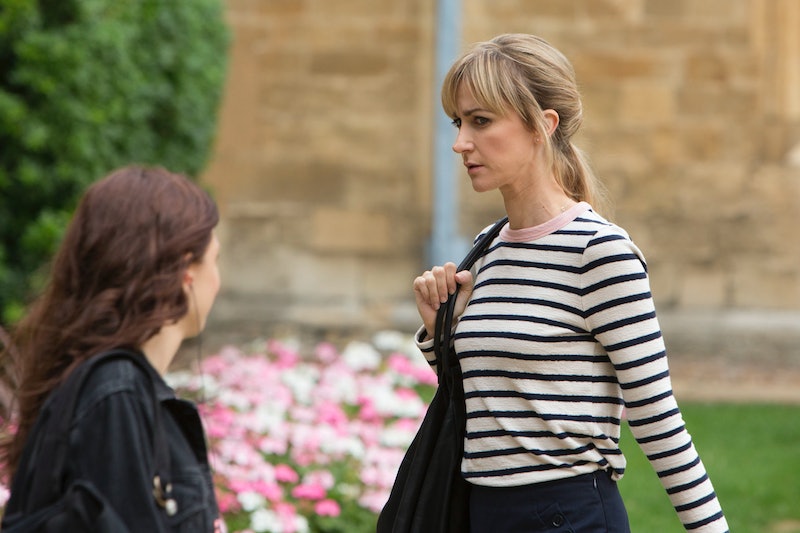 If you like to get all your TV action in quick succession, new ITV thriller Cheat is for you. Airing over the course of four consecutive nights, the series follows the battle between a university professor and her equally intelligent student. But where was Cheat filmed?

Well, I'll give you a few clues. One: a city home to a very famous university. Two: a city with canals. Three: a city full of bikes. If you're still racking your brain, the answer is Cambridge. In fact, many scenes were filmed in the picturesque city, reports the Daily Mail. Katherine Kelly — the actor who plays professor Leah — was even spotted cycling numerous times in the summer of 2018.

It's easy to assume that the series' main filming location means it is set in Cambridge. But, as director Louise Hooper explained, the setting is a fictional one. "The actual college is just a made up place, we used lots of different places," she told the Express. "We used schools and camps outside of Cambridge, so it’s not set there."

However, Cambridge was a deliberate filming choice. Hooper described the city as "stunning and beautiful. We start in a prison waiting room, which is dark and grim, so you set that world and then we wanted something fresh. I also like the idea of it being shot quite geometric, so you feel like here’s the wonderful world of spires and punts and it all feels totally gorgeous but actually it's quite dark and dangerous.”

As the Radio Times reports, the prison room was filmed in an unnamed stately home, adding another location to the series' belt. It appears as if even the timing of the filming was preconceived. Hooper told the Radio Times that Cheat's bosses didn't want the feeling of a "Scandi noir" so chose to film it during a "hot lovely summer."

According to the magazine, Cheat actually started off as a 90-minute film idea, but quickly transformed into a four-part mini series. When a student called Rose (played by Molly Windsor) submits an essay that seems too good to be true, her professor, Leah, accuses her of cheating.

Taking the accusation as a personal attack, Rose begins a war of retaliation while Leah becomes fixated on trying to prove her gut instinct right. ITV says the series ends in "fatal consequences" and is a story exploring "how far we're prepared to stand up for what we believe and at what cost."

You're bound to recognise the actress behind Leah's character. Kelly starred in Coronation Street from 2006 until 2012 and has appeared in other notable series including Mr Selfridge, The Night Manager, and Strike Back. Windsor, meanwhile, is a 21-year-old who won the 2018 BAFTA TV Award for Best Actress for her role in BBC series Three Girls.