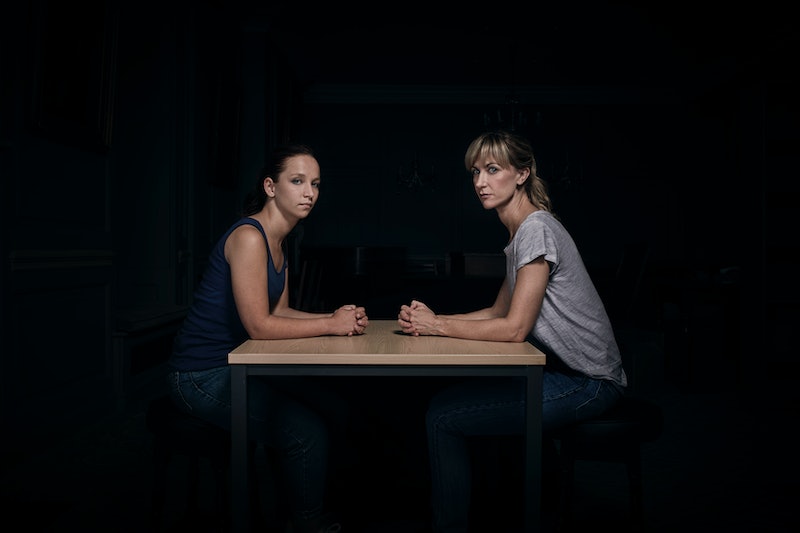 If you're after another on-screen pairing as tumultuous as Eve and Villanelle's in Killing Eve, then look no further than ITV's latest psychological drama Cheat. Originally written as a 90-minute movie, the four-part series explores the damaging relationship between a university professor and a student after an accusation of plagiarism turns into a tale of seemingly brutal vengeance. But is Cheat based on a true story?

While there has been a sharp increase of essay-writing companies in recent years as BBC reports, a representative for the show told me the story presented in Cheat is entirely fictional when I reached out for comment. And while the series was shot in and around Cambridge, the university featured is purely fictional as well.

Even though Cheat isn't based on a true event, but that doesn't stop the story from being seriously gripping. After undergraduate Rose Vaughan (Molly Windsor) submits her dissertation, Dr Leah Dale (Katherine Kelly) questions whether or not it's entirely Rose's own work. As Kelly told the Mirror, "Leah takes her job seriously, so [she] stands up for what she believes in. But she's never been tested."

And boy, does Rose test her. While you'll have to wait until the first episode airs to figure out what actually goes down, judging by the trailer Rose sets out to intimidate her professor after being accused, going so far as to frame her for murder.

I can't be the only one already trying to figure how on earth an accusation of cheating seemingly turns into a murder investigation. I mean, it's no wonder that ITV's Head of Drama Polly Hill referred to Cheat as "fiendishly engaging" in a press release, and that it's a series that "promises to have audiences on the edge of their seat."

You'll most definitely stay on the edge of your seat through all four episodes thanks to screenwriter Gaby Hull and director Louise Hooper, as they've made sure that Rose and Leah are "two fiercely intelligent minds unwilling to back down [to] keeping audiences guessing from the start, exploring just how far we're prepared to stand up for what we believe, and at what cost," as described in the press release.

"I'm not interested in victims. I like strength and with that you can have these other emotions" Hopper said during a screening for the series according to Metro. "I want to be authentic and real so you can have bulletproof reality."

"It's not cat-and-mouse it's cat-and-cat. It's two strong women. It's two boxers in a wring. I never wanted one to be weaker than the other. They're two sides of the same coin."

With both determined to prove the other wrong, it's no wonder that the consequences for Rose and Leah's end up being so dire. This series is a must-watch, that's for sure.