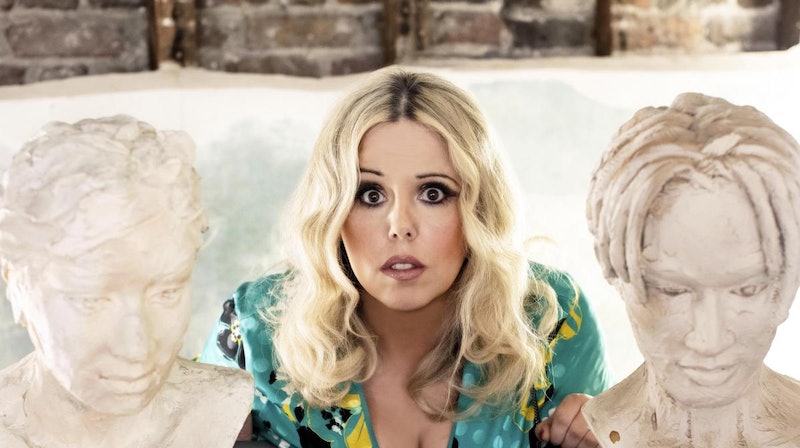 Oh what a time to be alive. Hey, that wasn't sarcasm, seriously what a time to be alive. OK if we just put the blinkers on and ignore all of the largely horrific things going on in politics. But, in the TV world, women are having a serious moment. Hallelujah! Female-created and -fronted comedy is on the rise and the latest season of GameFace is just the ticket to wash away those "where's summer gone?" blues. The show is relatable AF for many reasons, including the fact that GameFace was filmed in a place that'll be familiar to a fair few of us.

London crew come through because this show is not only set in London town, but filmed there also. I contacted Objective Media Group, who clarified that the show is shot in the capital, apart from some scenes, which were filmed in the British countryside.

The location for the show makes a whole load of sense because, I mean, is it really a show about being a bit stressed, lost, and lonely unless it's set in the loneliest cities in the world? I think not sir. And I don't think you need to actually live or have lived in London to know that life there can be a bit tricky.

The show, which is now on its second season, is all about Marcella, played by Roisin Conaty, a struggling actor in London. Despite life throwing her a lot of curveballs, Marcella is managing to stay positive and optimistic. She is recovering after a year of heartbreak, picking up random temp jobs, and bagging herself a few less-than-seminal acting roles. Flat sharing, sometimes despairing, but always sunny side up, Marcella is the face of the funny but hapless pal you wish could get a break. Her mother, played by the great Pauline McLynn, is so concerned about her welfare that she had previously bought her daughter life coaching sessions on Groupon in season 1. Which is such a hilarious but scarily believable situation.

Conaty is, of course, best known as being an incredible comedian and absolutely bossing representing women in the male-dominated industry. The London-born star has been a regular on the stand up circuit, panel shows, and as an actor for years now. Writing and starring in her own show was a natural progression. However, there are some stark differences when you're at the wheel.

The Express reports that, while speaking at a press event, Conaty explained that having a comedy show so full of heart means approaching it from a different angle and the sacrifices you have to make. "The thing I've always wanted to do with GameFace is to go for belly laughs but it has to feel like you're emotionally invested in the characters," Conaty said. "As a stand-up it feels really weird to kill a big joke but sometimes those are the choices you have to make."

The show is six episodes long and for those who are yet to see the first season, it's luckily all available online on Channel 4's streaming service All4.