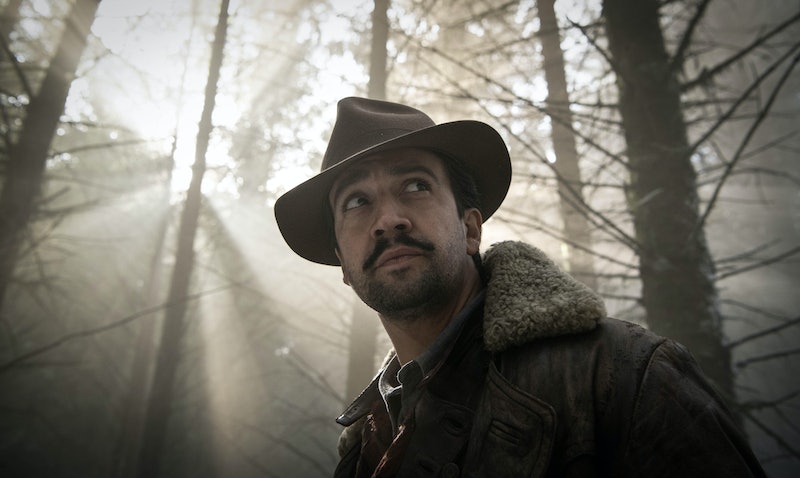 Philip Pullman's epic novel series is being brought to life in the BBC's latest fantasy drama, His Dark Materials. The series is an adaptation of the book trilogy's first instalment, and boasts an all-star cast which includes the Broadway powerhouse Lin-Manuel Miranda, Shameless star James McAvoy, and many more. But where was His Dark Materials filmed? Here's everything to know about this thrilling new adaptation.

As the BBC reports, the vast majority of filming took place across Wales, with production predominantly being held within the state-of-the-art Wolf Studios Wales in Cardiff — and one of the show's lead actors, Lin-Manuel Miranda, also revealed that filming for His Dark Materials had occurred at the stunning Brecon Beacons national park in South Wales. Miranda, who portrays the character of Lee Scoresby in the TV adaptation, relocated to South Wales during the show's production, and when speaking to the BBC, the actor revealed that the opportunity to live in "a new part of the world" was largely what inspired him to accept his latest role. The Hamilton star went on to discuss his love of Welsh hotspots, including the likes of Caerphilly Castle, and revealed that he regularly treated locals with surprise appearances at a karaoke bar in the Welsh capital.

Although the first season of His Dark Materials has only just arrived, work on the show's second series is already underway. As Digital Spy reports, season two will focus on the events of the trilogy's second novel The Subtle Knife, and speaking to Entertainment Weekly, one of the show's executive producers discussed how the decision to shoot the first two series so close together arose from 14-year-old Dafne Keen's age. The young actor completed filming back in December 2018, and returned to film scenes for His Dark Materials series 2 the following summer. Executive producer, Jane Tranter, revealed that Keen's gap in filming was the longest show-makers were willing to allow, due to fears the actor might significantly grow if production was put on hold any longer. Because of these continuity concerns, the BBC and HBO "very kindly" agreed to green-light the first 16 episodes — all of which cover the first two books of Philip Pullman's famed novel series.

According to the Radio Times, the fantasy drama will air on HBO over in the states, however, His Dark Materials first debuts here in the UK, and you can enjoy the first episode of what promises to be a fantastic new series on Sunday, November 3 at 8 p.m. on BBC One.