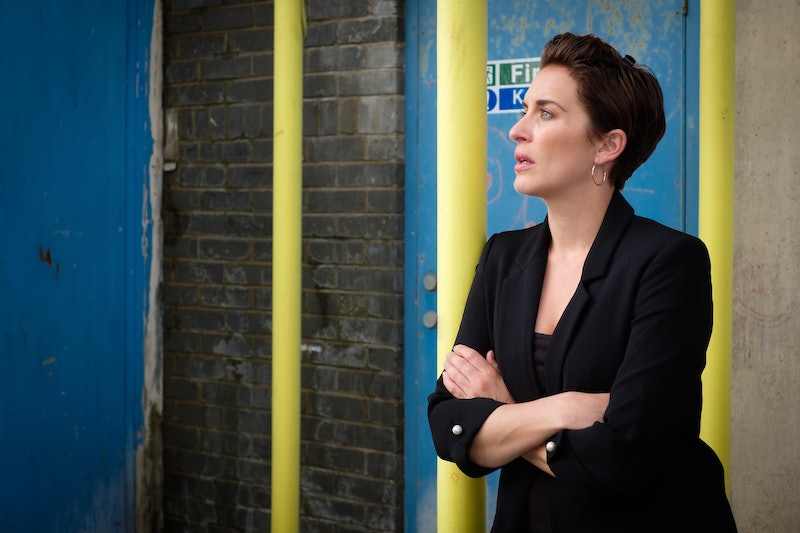 Channel 4’s I Am Nicola explores the intricacies of a coercive relationship in a familiar, domestic setting. And as captivating as Vicky McClure and Perry Fitzpatrick’s performances are in the first part of this anthology series, it’s hard not to be a tad bit curious about the set surrounding them — especially since it’s pretty much contained into one house. So where is I Am Nicola filmed, and is it anywhere familiar?

Updated: A rep for the show tells Bustle that I Am Nicola was filmed in Watford, but the short film is not actually based there — "[i]t's any suburban town in the UK".

Earlier: Even though there are a handful of locations featured in I Am Nicola, there doesn’t seem to be any info on exactly where it was shot. I’ve reached out to a rep for the short film to see whether they have any more info on this, but have yet to hear back. I’ll let you know when I do.

Although, the central place that viewers become familiar with is the couple’s home, which was a real house on an estate. “[W]ith all the films, crucially, the locations are kind of really apart of the whole ethos of it,” director Dominic Savage said during a press screening attended by Bustle UK. “So for me, in each film, the places where the characters live and occupy have to be right and have to be authentic to what it is.” He continued:

“The house they were in was a young couple’s house, I didn’t want it to be a family house or a single person’s house, it had to be a couple of a certain age.”

McClure went on to mention how any drawer or cupboard in the house had “stuff you’d expect to be in there,” which added to the authenticity and believability that this house was actually lived in, that it wasn’t just a set. “Dominic casts the locations, he really interrogates that whole process of prep. Do a real couple live there? What are the real couple like? I want to know all about that real couple and if they’re similar to the couple in the film. What mugs do they use?” producer Krishnendu Majumdar added.

“Whereas usually in production we’d take everything out of the kitchen and put our own stuff in that’s clearable for copyright reasons. All that stuff but Dominic is like no, no, no, it doesn’t feel right, I want the stuff in their kitchen and so the kind of locations, that’s one of the other things I found quite different.”

Not only does this make the house feel lived in, but it also made McClure and Fitzpatrick forget they were acting. “I remember doing a really long take in the house and Perry actually went for a wee,” she said during the screening. “I was like… he’s gone upstairs, and then I heard the toilet go and I was like ‘Okay well that’s what people do in life so…’”

The actor also spoke of how this sort of environment allowed a particular type of freedom, which lent itself to making the couple’s relationship — and the film itself — more believable. “It’s just nice to have the opportunity to just let loose and just do it, be it. There’s nobody telling me to stand on a mark. I’m not bumping into lights, I’m not remembering lines. It’s just a really free job to have and it’s great,” McClure said.

“Dominic will pop and say go and do this or something and you think ‘Oh God, that’s going to ruffle some feathers.’ It’s exciting yeah, I just thoroughly enjoy it.”

More like this
'The Catch' Revisits A Famed Irish Filming Spot From 'The Tudors'
By Darshita Goyal
Claire Foy Spoke Out About 'The Crown's Gender Pay Gap
By Sam Ramsden
Olivia Colman Stars In First-Look Trailer For BBC's 'Great Expectations'
By Sabah Hussain and Sam Ramsden
Alan Carr's 'Changing Ends' Is A Witty Sitcom Based On His Own Life
By Darshita Goyal
Get The Very Best Of Bustle/UK
Sign up for Bustle UK's twice-weekly newsletter, featuring the latest must-watch TV, moving personal stories, and expert advice on the hottest viral buys.