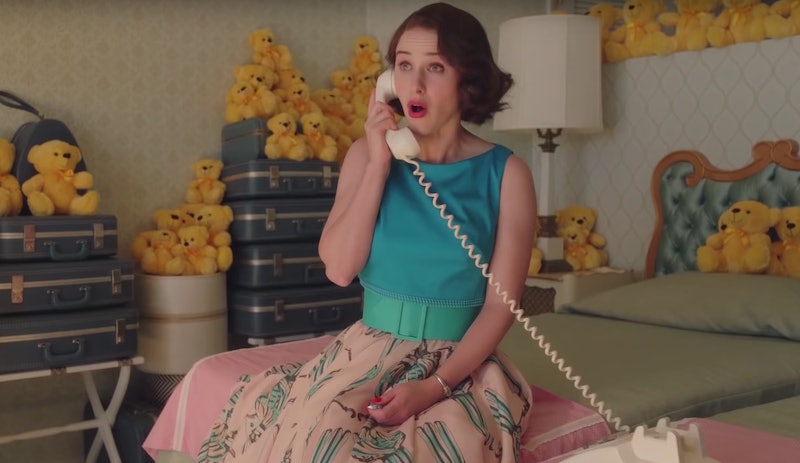 Whether unfolding in Manhattan or the Catskills, The Marvelous Mrs. Maisel has always been grounded by a very specific New York sensibility. That was true even when Season 2 decamped briefly to Paris, but now, Midge isn't just spending a few days in Europe — she's embarking on a full-on national tour. That means the Marvelous Mrs. Maisel Season 3 was largely filmed outside of New York — or at least, was made to look like it was. Most of the set photos so far have been from the show's home base in Manhattan, and it's unclear where exactly Midge will be stopping with Shy Baldwin or if the cast shot on-location for each city. However, we do know they'll hit at least one big beach destination: Miami.

Back in August, People published an exclusive on-set photo of Midge (Rachel Brosnahan) and Susie (Alex Borstein) lounging poolside at the famed Fontainebleau hotel in Miami Beach. Midge appears to be enjoying the warm weather in all its sunny glory, while Susie — outfitted in her usual cap, pants, and leather jacket — looks to be having a difficult time beating the heat.

This came several months after Tony Shalhoub and Marin Hinkle, who play Midge's parents Abe and Rose Weissman, hinted to Entertainment Tonight that at least part of Season 3 will take place in Miami. "I think I've heard that we're going to Miami in June. That's all I know," Shalhoub told the outlet at the time. "I don't know what that [entails]. It's about [Midge's] tour, but that's all I got."

Beyond Miami, New York will continue to be a central part of the series, and the Season 3 trailer indicates tour stops in Las Vegas, Los Angeles, and Chicago — likely just a few of many places Midge will navigate while on the road. In March, Marvelous Mrs. Maisel creator Amy Sherman-Palladino told Variety at PaleyFest that this season will expand Midge's world — and push her out of her comfort zone — more than ever before.

More like this
'The Undeclared War' Took Inspiration From This Gavin & Stacey Location
By Maxine Harrison
Where Was 'Only Murders In The Building' Filmed? The Arconia Has A Different Name IRL
By Radhika Menon
6 Mind-Blowing Fan Theories About How Stranger Things Will End
By Kadin Burnett
Why Sadie Sink Is Hopeful Max Will Return In Stranger Things Season 5
By Brad Witter
Get Even More From Bustle — Sign Up For The Newsletter