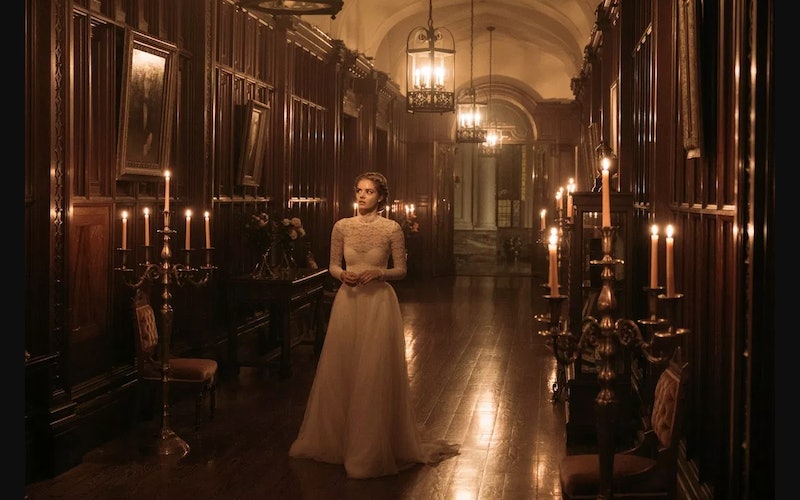 New bride Grace (Samara Weaving) finds out becoming part of the Le Domas family isn't so easy after hide-and-seek with her husband's clan reveals itself as "The Most Dangerous Game" in the upcoming film Ready or Not, in theaters Aug. 21. Chased all over the family's old and vast estate, Grace realizes the only way to survive until dawn is to fight back. And if you take a trip to Canada, you can take in some of the locations where Ready or Not was filmed — hopefully without bloodthirsty in-laws on your tail.

While several locations were used to convey the vast estate of the Le Domas family, one spot in particular captured the seductive opulence and dangerous pitfalls of capitalist excess. What starts off as fun, if odd, post-wedding family tradition turns into a night of bloodshed, as husband Alex (Mark O'Brien) tries protecting Grace from his family's demented belief they must sacrifice her for the family to survive.

Independent horror magazine Ganiveta reports that shooting took place over 26 days across a number of Toronto, Canada-adjacent locations. Those places include the opulent Gothic Revival castle Casa Loma, a popular location for conveying "old money" wealth in film and television — it stood in for stately Wayne Manor in The Titans, X-Men headquarters/Xavier's School For Gifted Students in several of the films, and an opulent home in Chicago. The film also shot in public Sunnybrook Park, featuring wide-open lawns and the Sunnybrook horse stables, and the Claireville Conservation Area, filled with winding paths through nature just outside suburbia.

But one location in particular stood in for the Le Domas family's particularly bent brand of capitalism. Over on Facebook, the Parkwood Estate National Historic Site created a whole album celebrating the film's shoot at the location ("due to the language in the commercials", they explain — a little blue for their family-friendly public face). Over 85% of the film was shot on the site's over 24 greenhouses, numerous gardens, and within the 55-room mansion.

The home originally belonged to the McLaughlin family, per the official site, whose head Samuel was the auto baron who founded General Motors of Canada in 1917. The grand estate reflects the family's love of horticulture and the kind of intense and lavish wealth that accumulated in the Gilded Age, as European artisans were flown in to recreate the look of bluer-blooded fortunes accrued and kept over centuries, instead of decades.

In 2018, General Motors Canada announced that they were ceasing operations, ending over a century of car manufacturing and erasing thousands of jobs, per the Montreal Gazette. As for Parkwood, the McLaughlin family ceased living in it in 1972, also according to the official site. In 1989, the same year the paterfamilias was declared a Historic Person, the space was declared a National Site and turned into a semi-public museum. The old adage that you need money to make money seems to hold true, as the site's opulence (which includes rooms still furnished with McLaughlin objects d'arte and decorated by their hired experts) and Canadian tax credits drew Hollywood to drop plenty of money utilizing the site.

It's been featured in numerous films already, including The Tuxedo, X-Men, A Simple Plan, and 12 Monkeys, among many, many others. But playing the role of a wealthy family home may be the least the estate has ever had to stretch. It's now open to the public for an entrance fee; there's an "Auto Baron's Experience Tour," a tea house, and a gift shop. Check before you visit, however, as the site occasionally closes for filming and other private events.