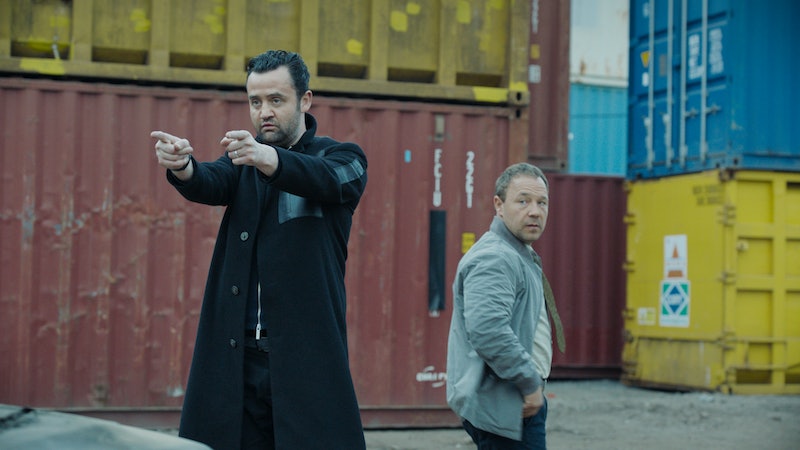 Sky's brand new comedy Code 404 follows crime-fighting duo DI John Major and DI Roy Carver. With long-time friends and former collaborators Daniel Mays (Good Omens, Rogue One) and Stephen Graham (This Is England, Boardwalk Empire, The Irishman) leading the show's cast, comedy fans can't wait to see what was in store – especially since this is Graham's first light-hearted project for many years. But what else is there to know about the new series? And where was Code 404 filmed?

Unfortunately, official details of the show's filming process are few and far between. Filming began in March 2019 and, from the looks of things, the six weeks of shooting took place in the UK. However, we don't have much more information than that so Bustle has reached out to Sky's reps for comment, and I'll update with any new information once it becomes available.

As previously mentioned, Code 404 revolves around a formidable crime-fighting double act made up of Detective Inspectors John Major and Roy Carver. The pair work within the London Met's Special Investigation Unit, and when Major is shot and killed on the job, an experimental Artificial Intelligence project is used to bring him back from the dead. However, following his resurrection, it quickly becomes apparent that something isn't quite right, and Major's crimefighting instincts aren't what they used to be.

Graham recently opened up about his experience filming the new comedy. Speaking to the Metro, he discussed how it was "probably the most fun" he'd ever had on a set, and revealed that filming with Mays was very much a highlight. "The amount of times we corpsed and the fun we had," Graham recalled. "Daniel’s such a gregarious person, it’s a joy to work with him, it really is." Graham and Mays previously worked together on the 2004 comedy Top Buzzer, and have been friends ever since.

Commenting on the show's lead stars, Sky's Head of Comedy, Jon Mountague, described Graham and Mays as a "dream team," and credited the network's latest offering as being "endlessly hilarious and very, very arresting."