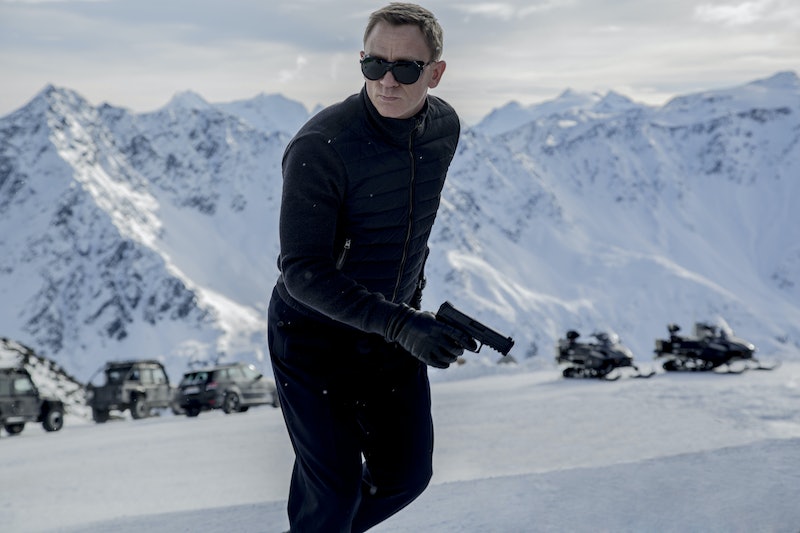 Frolicking around high up in the snowy mountains seems like an apt location for Daniel Craig era James Bond — the actor with eyes more icy than The Alps. Craig doesn't seem any more at home than when he's firing pistols in what looks like an extremely fancy ski resort, which is just the setting for 2015 James Bond Spectre. With the film set to make its network premiere on ITV One, it'll probably tempt you into booking a New Year's ski trip. For those who want to do it like Bond, you'll probably want to know where Spectre was filmed.

Coming to ITV One on New Year's Eve at 8 p.m, Spectre's snowy climes should set you in the mood for the pre-midnight countdown to 2019. It's all well and good seeing them on the screen, but how can you immerse yourself in them like Bond? According to Mashable, those snowy scenes were filmed in a small corner of a skiing resort in Austria. Specifically, the tiny village of Obertilliach, which can be found in the Austrian Tyrol, Mashable reported on Dec. 4, 2014. The Location Guide took a closer look at the picturesque setting back on Nov. 5, 2015, reporting that it had also been the location for some 500 other films, including Chalet Girl.

You won't just see snow in Spectre. Actually, you'll get quite a big and diverse chunk of the globe. This film is basically wanderlust bait. The settings go from snow to sand, with some desert scenes filmed in the Moroccon region of Erfoud, according to Mashable. You'll also get a glimpse of the opulent sheikhs of Morocco's quaint cityscape, but the more high octane action takes place amongst the quiet of the desert.

One of the film's more recognisable settings is in Mexico City, where a stressful chase scene takes place among the bustling crowds of the Day of the Dead parade. Although it's been a longtime Mexican tradition, the parade had never actually taken place in its capital city prior to filming. But since it looked so fun in the film, the city has since taken on the tradition itself, The Independent reported on Oct. 27, 2016.

Of course, there are some locations a little closer to home. This is the English spy James Bond, after all. When Bond finds himself in some trouble with his bosses back in England, he's summoned to London, where he meets with them at the Treasury Building on Great George Street, according to Movie Locations. If you've not seen it in person, you might also recognise it as the setting for one of the ferocious street races in Fast and Furious 6.

If watching the film doesn't make you want to look at flight deals immediately, then you definitely have a stronger will than I do. Either way — come for the Bond and big action scenes — stay for the awe inspiring natural scenery that will make you want to up and leave your couch.