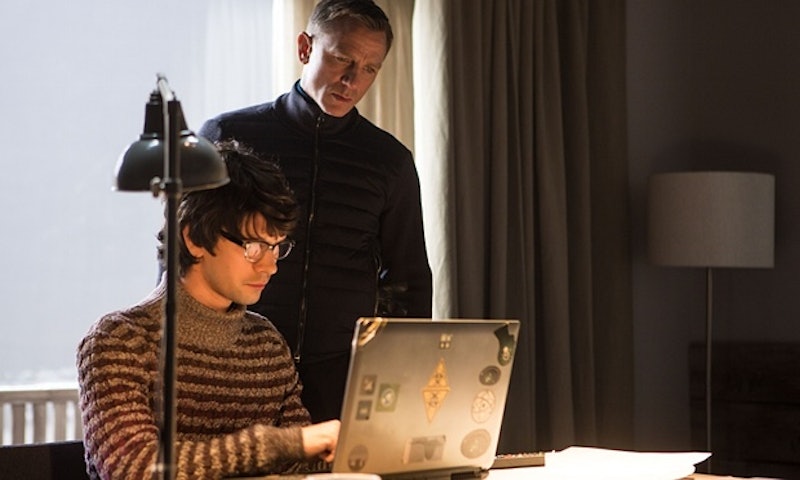 James Bond has always been known for his gadgets, and although Daniel Craig's version of the character has been considerably less doohickey-heavy than past iterations, he's still managed to make use of a few over the years, from his in-car defibrillator in Casino Royale to his biometric-coded gun in Skyfall. But Spectre , the newest Bond film, changes up the formula and brings more gadgets than fans have seen in years. There are returning favorites like a tricked out Aston Martin and an exploding watch, but there's also a new twist on an old gadget that allows Bond to be tracked by his bosses, an injected microchip that records his every move. But before you start worrying that Smart Blood exists like in Spectre , relax: it's probably not gonna happen. Yet.

To Bond fans, though, the technology isn't totally new. In Casino Royale, Bond is injected with a microchip that tracks his location and monitors his vital signs. However, when he's captured by the bad guys, the device is cut out of his arm, rendering it useless. MI6 seems to have learned their lesson in Spectre, because this time around Bond is injected with Smart Blood, consisting of nanotechnology that does the same thing while flowing microscopically through his veins. As for whether it could really happen, the answer is not yet, but someday it could be.

While microchip implants do exist in the world of pets, they don't possess any tracking capabilities. Instead, they simply transmit identification information to a scanner held a few inches away using a simple radio frequency, and they don't require batteries to do so. Also, they're not used in people, though some are trying to figure out a way to implement their use in children as a way to track them if they become lost. The problem with tracking inside the body lies in current GPS technology, which requires too much battery power (and therefore size) to run on a chip that could be injected into someone's body. But wouldn't nanotechnology solve this issue?

According to Spectre star Christoph Waltz, it wouldn't be that simple."If you’re not scared, then you’re missing the point," the actor tells Bustle. "And you kinda think, oh maybe one day we should get scared, no. It’s too late. It’s too late already, it’s gone. It’s not for nothing that the people who design these things all look like cool dudes hanging around San Francisco and make billions. They are not cool dudes, they are dangerous people."

No matter what, the technology seen in Spectre just isn't there yet. Nanotechnology refers to tech that's implemented on a molecular or even an atomic level, and its been a fixture of science fiction for decades. But now it's becoming a reality in a number of fields. There does exist a type of near-nanotechnology, called micro-electromechanical systems, that offers some GPS capability, but it's made for use in tracking guns and is not suitable to be injected into humans. However, there does actually exist nanotechnology that has been safely inserted into a human body — just not for the purposes of tracking. Some "nanobots", microscopic robots, have been used within the human eye to deliver drugs directly to the area that needs them, and the idea is that one day similar nanobots will be able to be injected into one's bloodstream to administer medication or even perform surgery. Some scientists even believe that a swarm of nanobots in the bloodstream could eventually make humans immune to disease, as the bots would simply destroy or fix any issues as soon as they arrive.

So society is still likely a ways away from having GPS trackers injected into people's bloodstreams, but given the various threads of developing technology that are heading in that direction, it seems like James Bond's "Smart Blood" may someday become a reality.

Check out the video below to see Bustle's Kelsea Stahler speak with Christoph Waltz about Spectre's technology and much more:

More like this
TikTok’s “Miley Stewart Summer” Trend Will Make You So Nostalgic
By Courtney Young
How To Add Music To An Instagram Post
By Emma Carey
Using Your Pet’s Name As A Password? Here’s Why You Might Want To Change It
By Cristina Sanza
The 10 Best Waterproof Watches For Swimming
By Lauren Moison
Get Even More From Bustle — Sign Up For The Newsletter