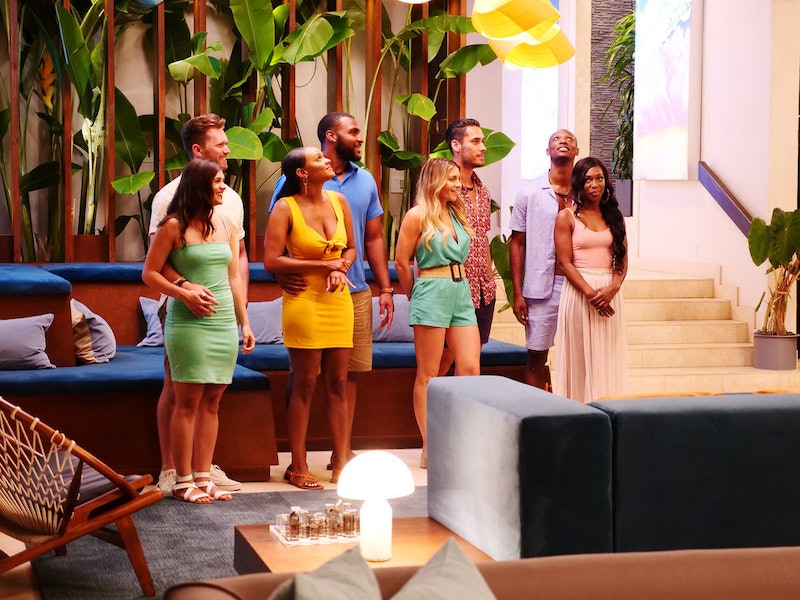 It may be kind of unfathomable why someone would sign up for Temptation Island, a show basically built to try to break up relationships. But once you find out where Temptation Island films, it starts to sound a little more, uh, tempting. Sure, all of the couples have to worry about potential cheating and betrayal, but at least they get to do it on a four week-long, all-expenses paid vacation to Hawaii.

That's right, just as the show's official application promises, all of the contestants get to experience an "all-expense-paid luxurious tropical vacation." For Seasons 1 and 2 of the newly rebooted series, that tropical location has been in Maui. Once on the island, the couples separate into two villas — one for the girls, one for the guys — and begin dating and getting to know 24 tempting singles.

With 16 people total in each villa, the cast needs a lot of space, which the Season 1 villas accommodated for. In a video tour of the guys' place, host Mark Walberg called it a "typical Maui villa." There was an extra-long dining room table to suit formal dinners for 16 people, a sun room with an ocean view, and an outdoor kitchen and bar. Still, the latest season called for something different, and according to a rep for USA Network, the Season 2 villas are new and improved.

They each have a much bigger kitchen, a lounge area fit for partying and cuddling, and a huge outdoor space including a pool with a view of the ocean. "Everything here is meant to be open," Walberg says in a video tour of the Season 2 guys' villa. "Every room is open to the other room, you can see everybody from wherever you are." The open concept on the first floor was probably very intentional, meant to encourage everyone to keep mingling. A video tour of the girls' villa, meanwhile, shows an indoor-outdoor patio, a hot tub, an infinity pool, and "an ocean view everywhere you go," per Walberg.

Each villa also has four upstairs bedroom suites with their own private bathrooms, which is where each half of the four couples stay. That's a stark difference from other reality dating shows, on which contestants are often relegated to cramped, camp-style bunk beds (i.e. Love Island, Bachelor in Paradise). In addition to their own space, the girls each get balconies with hammocks. Notice how the downstairs is set up for socializing and the upstairs for privacy? That can't be a coincidence — it's the perfect recipe for temptation.

Last season, that recipe worked on a few of the couples. Evan fell for single Morgan and ended his 10-year relationship with Kaci, and both Kady and John and Karl and Nicole ultimately decided to part ways. Javen and Shari were the only couple who stayed together, so the new couples don't exactly have the odds working in their favor. At least those luxury villas will help to cushion the pain of potential heartbreak.