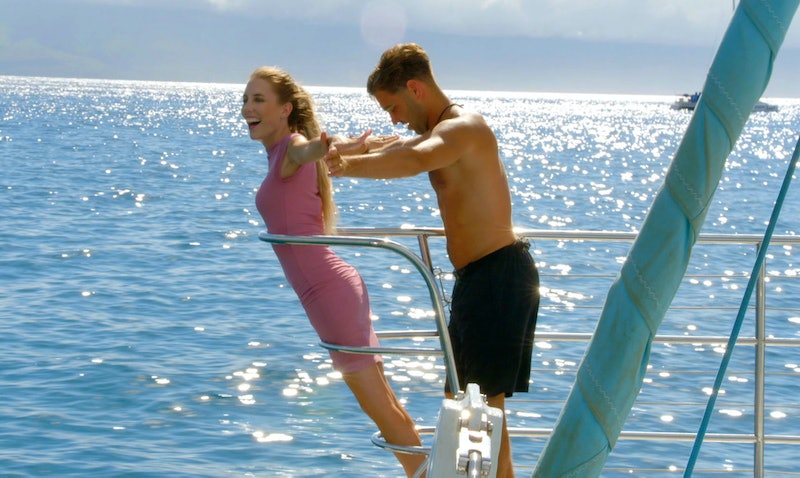 The moment she arrived on Temptation Island, Kaci Campbell's life was forever changed. Going into the show, she knew it would be illuminating — she was hoping to get engaged to Evan Smith, her on-again, off-again boyfriend of 10 years, and wanted to gain clarity about whether or not it was the right move for them. She never expected how intense — or heartbreaking — her experience would turn out to be, but Kaci tells Bustle that though she and Evan ultimately broke up, it was the best thing for her.

"This sounds insane, but Temptation Island honestly saved my life," she says. "It's the best thing that ever happened to me."

Before arriving on the island, Kaci and Evan had known each other since they were 19 years old. She says they were friends "for a really long time" and dated on and off. Eventually, they moved in together (first in Hawaii, then L.A.), adopted dogs, and got a joint checking account and health insurance plan. "It was basically everything that a marriage was but without the actual commitment," she says. "And he kept telling me like, it's going to happen this time, and then that date would come and nothing would happen. And then another year would go by and it just kind of got to the point where I felt really stuck." Enter Temptation Island.

"The show just kind of fell in our lap super organically," Kaci explains. "And it felt right ... I wouldn't necessarily recommend it unless you're at a true crossroads, but it just felt right for us. Especially considering the situation that I was in with him." She used the show as an opportunity to pose a relationship ultimatum: take the next step together and get engaged, or move on.

Of course, we now know how that panned out: in the chaotic season finale, Evan chose to leave with Morgan Lolar, a single he'd met on the island, and during the six-month check-in, he proposed to her. Kaci says she was completely baffled by how things unfolded — even after seeing Evan and Morgan's relationship grow during all of those difficult bonfires.

"The game plan was, we're on a reality show. And producers want good ratings. So no matter what we see, and no matter what we hear, we do not make any decisions. And we don't do anything crazy," she says. "So that's what I'm sticking to. I was seeing crazy things and I was hearing crazy things. But I was going to stay loyal to the end, because that's who I am." After his first date with Morgan, however, Evan threw that game plan out the window.

When it came time to confront Evan, Kaci walked into the final bonfire "brave and confident and, like, as badass as possible," but after hearing what he had to say, she was in shock — she didn't know whether she wanted to cry or get mad or stay or leave. "Am I ever going to see him again?" she asked as she rode away, Bachelor-style, in a black car. But after having time to reflect, Kaci knows her breakup with Evan was a blessing in disguise.

"Right after the show, I was devastated. I mean, I was texting Evan non-stop trying to make sense of everything. I was trying to fix it and put it back together," she says. "And then I got to a point ... [where I was like] 'I'm done. I want nothing to do with you.' And I just was finally not blind to it anymore."

Since then, Kaci says Evan has tried to reach out to her "many, many times through all different platforms" including text, DMs, and calls, and she ignores them. (Reps for Evan declined to comment). Now that the rose-colored glasses have been removed, however, she's able to look back and see everything that was wrong with their relationship.

"It was an extremely toxic situation that I was in many, many, many years. I was walking on eggshells for many, many years," she says. "And I wasn't myself, and all my friends and family came out of the woodworks and they were just like, 'Kaci, we've been praying for this for a very long time. We didn't want to get in the middle of it. But you are not yourself when you're with him. Like you're a completely different person. It's like you have a ticking time bomb on you. And you know it's going to go off at any second. And then when you're not with him, you're so free and loving and just confident in yourself.' And it's it's just such a blessing. And I don't know, I dodged the biggest bullet."

As for her current relationship status, Kaci says she's single, but admits she has feelings for her Temptation Island castmate Val, which she chose not to pursue while on the show out of loyalty to her relationship. "I don't know what's going to happen with [Val]," she says. "I might go to New York for his birthday ... but I don't know. I just feel like everything happens for a reason. I'm really enjoying just finding myself and getting through this the past six months and we'll see what happens. But I'm really excited for my future. Honestly, it's very bright, and I'm a very blessed girl."

And though Kaci lost a boyfriend on Temptation Island, she gained three besties. She became extremely close with the other core girls on the show — Shari, Kady, and Nicole — and continues to spend time with them. "We're so bonded, all four of us," she says. "And we're also completely different. So I think that's why we work so well. We just all really balance each other out. And it's honestly an amazing thing. I don't think I've ever had girlfriends the way that I had a bond with those three."

You lose one, you win three? (Maybe four, including Val.) When you put it that way, Kaci's Temptation Island experience doesn't seem so bad. It helped her come to a necessary realization, and now, she gets a well-deserved fresh start — rose-colored glasses not included.

More like this
'MAFS UK' Changed The Rules After Matt & Whitney Cheated On Their Partners
By Catharina Cheung
You Can “Fall In Love” At The Resort Where Bachelor In Paradise Season 8 Was Filmed
By Brad Witter
The 'Bachelor In Paradise' Schedule Shifts To 4 Hours Every Week After The Season 8 Premiere
By Brad Witter
‘The Ultimatum: Queer Love’ Is Officially On The Way
By Radhika Menon and Kadin Burnett
Get Even More From Bustle — Sign Up For The Newsletter