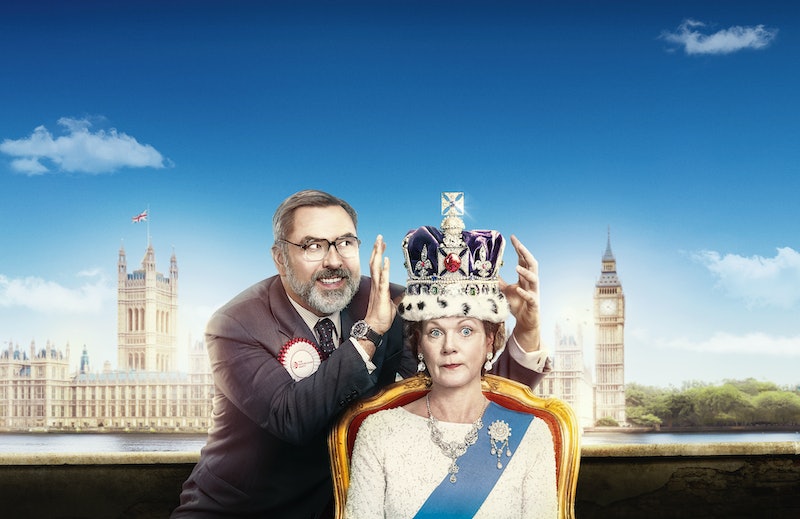 Upcoming comedy The Queen & I is perhaps the most anticipated slice of Sky One's 2018 Christmas TV lineup. The show is based on Sue Townsend’s 1992 novel of the same name, and tells the fictional story of the royal family, who are forced to live a normal life after Britain becomes a republic. But where was The Queen & I filmed?

The television adaptation will premiere on Christmas Eve at 6 p.m., and according to the Daily Mail, some scenes of the Sky One show were shot in Salford, Greater Manchester. Earlier in the year, stars of The Queen & I, Samantha Bond and Frances Barber, were spotted filming scenes for what appeared to be a lively street party in the Northern city. The impressive cast also includes Britain's Got Talent judge David Walliams, who portrays a power-mad Prime Minister, as well as comedian Johnny Vegas, who plays a neighbour that establishes an unexpected relationship with a royal family member.

The plot of the show begins after Jack Barker (Walliams) unexpectedly wins a general election, and his first act as Prime Minister is to make Great Britain a republic — which in turn dismantles the institution of the royal family. The royals then relocate to an estate in the north of England, and adjust to life as regular citizens. According to the Radio Times, the royal's new neighbours aren't very welcoming upon their initial move to the estate, however relationships begin to form — and the PM's outrageous election promises start to unravel.

According to TV Wise, the series was commissioned by Sky’s Head of Comedy, Jon Mountague, and Sky’s Commissioning Editor for Comedy, Morwenna Gordon. The Queen & I was directed by Dan Zeff and produced by King Bert Productions. In a statement given to the Radio Times about the new show, executive producer, Jo Sargent, said "The Queen and I is a truly unique, feature-length adaptation of the late Sue Townsend’s original novel and we are so proud to be bringing her incredible work to the screen."

One review by Brian Donaldson for The List describes The Queen & I as an "enjoyably fluffy" bit of Christmas television, and points out how Townsend, the author of the original novel, clearly harboured a soft spot for the royal family when she penned the book back in 1992, by suggesting that the country might fall apart without them. The review also discusses how notable royals from the era in which in was written were left out of the production, including Diana, Princess of Wales and the Duke of Edinburgh.