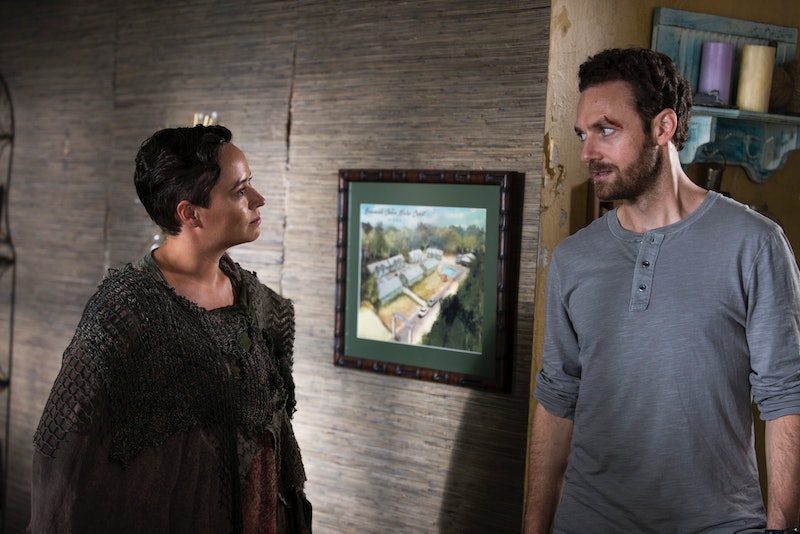 Spoilers for the March 4 episode. Sorry Enid, your days of post-apocalyptic recruitment on The Walking Dead (casting: Sharon Bialy) may be over. After killing the Oceanside leader, she's headed back to Hilltop. But where is Aaron going on The Walking Dead? He's not giving up just yet, but his next move is unclear.

Aaron and Enid are immediately captured by the beach-dwelling ladies. For a moment, it looks like they are going to be executed by the deceased Natania's granddaughter, Cyndie. Instead, and with a little bit of convincing, the two are let go. Cyndie gives Enid the same message that she gave Tara back in Season 7: go away, don't come back, and don't tell anybody about Oceanside or their whereabouts. If Enid and Aaron come back, they'll die.

That said, Cyndie also told Tara back then that it was Natania who forbade the community from joining the fight. Cyndie was willing to help take Negan down and get revenge for what the Saviors did to them. Now that Natania is dead, and Cyndie appears to be in charge, what will happen? Based on this episode, Cyndie is respecting her late grandmother's wishes — unlike Rick Grimes, who is lowkey ignoring his son's pleas for peace.

"I wanna go home more than anything," Aaron tells Enid, "but I can't leave. Not until they join the fight." He asks her to go back to Maggie, tell her what happened, and tell the Hilltop not to come there. That shouldn't be a problem. The Hilltop is clearly busy sending zombified Savior prisoners to Negan in coffins. Is that meant to be a Sasha reference? It's creepy, whatever it is.

Anyway, Aaron is staying behind. Maybe he just wants no part of Maggie's intimidation strategy, but he tells Enid that he thinks Kathy and Beatrice are open to joining up and that he'll figure something out. The road trip to Oceanside must have been pretty intense, because he and Enid share a heartfelt goodbye. Enid makes him promise that they'll see each other again, which he dodges by instead making her promise to stay safe.

All that is well and good, but how is Aaron going to accomplish this and where is he going to go? He can't just walk back into Oceanside at this point, and he knows it. Is he just going to camp out on the edge of this community, the Oceanside-side, and whisper until someone believes in him? Is he going to find Heath — who went missing several seasons ago after discovering Oceanside with Tara?

"Aaron is such a fascinating character," said actor Ross Marquand in a 2016 interview with PopSugar, "because he's diplomatic to a T. He genuinely wants to keep the peace for everybody, but he's not afraid to fight."

He compared that view to Morgan's, who at the time didn't believe in harming others at all. Aaron strikes a balance that Morgan doesn't seem to have found. "I think that's a really wonderful characteristic to have in their day and age," Marquand said in the same interview, "where everything seems so chaotic. He, Deanna, and some other citizens in Alexandria fought really hard to make that community happen, and I love that in the midst of all this chaos, he really fought to protect everyone and protect his loved ones. It's a beautiful, beautiful trait to have as a person."

However, in Season 8, it sure seems like Aaron is at least entertaining the idea that he won't make it back from this mission. That's more than a little upsetting. Lest we forget, Aaron acquired a baby from a Savior raid. He may have lost his boyfriend Eric, but he has a family at Hilltop. So hopefully whatever his next move is works out, because the fight needs Aaron — and if there is going to be peace, that new world needs Aaron too.

More like this
Here’s The True Story Behind 'A League Of Their Own'
By Morgan Leigh Davies
Watch The Trailer For Netflix’s Edgy New Comedy 'FAKES'
By Brad Witter
Everything To Know About 'Loot' Season 2
By Kadin Burnett
Does 'Locke & Key’s Ending Mean There Could Be A Season 4?
By Sophia Moore
Get Even More From Bustle — Sign Up For The Newsletter