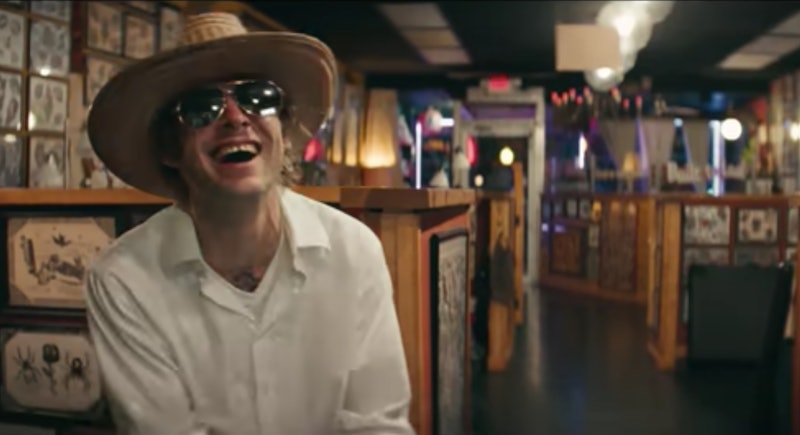 Netflix's new docu-drama The Legend of Cocaine Island, available March 29, is based in reality, but also heavily fictionalized. One of the major liberties the film takes is in hiring actors to portray some of the real people who were involved in family man/business owner Rodney Hyden's attempt to find a hidden stash of cocaine on the island of Culebra, Puerto Rico. So while Hyden portrays himself throughout, in the reenactments, actor Bo Butterworth takes on the role of Andy Culpepper, a Florida man Hyden once described to GQ as “a self-admitted functioning drug addict"; a guy who, in the movie, asks the pivotal question: "If you knew where 2 million dollars was buried in the ground, would you dig the sh*t up?” On screen, he's certainly an enigmatic force, but what happened to Andy from The Legend of Cocaine Island in real life?

While Hyden ended up getting charged for attempted possession and intent to distribute in 2012, he was only sentenced to 60 days behind bars followed by five years of community service, according to GQ. The magazine also reports that Culpepper was never indicted for any involvement, despite Hyden alleging that Culpepper played a big role in telling him about the coke in Culebra. He also connected Hyden with his roommate, a dealer named Danny "Dee" Jimenez.

As seen in the film, the roommates ended up going to Puerto Rico with Hyden, but what Hyden and Culpepper didn't know was that Jiminez was asked to be an informant for the Alachua County sheriff’s office after he was caught with 130 oxycodone pills in the car just a few months before their trip to Puerto Rico, GQ says. Both Culpepper and Jiminez later ended up testifying after Hyden was caught, due in part to tips from Jiminez. On the stand, GQ reports, Culpepper told prosecutors they'd spent their time on the island "building sand castles," which had the judge and jury laughing.

And it seems like all those wacky stories about Culpepper are pretty accurate. According to Culpepper's Facebook page, he's a huge Florida Gators fan and is currently "self-employed." He left Florida and now lives in Ukiah, California, the largest city in Mendocino County, where the Ukiah Daily Journal reports he was arrested in February 2018 on suspicion of use or under the influence of a controlled substance, possession of a controlled substance, and possession of drug paraphernalia. The now 36-year-old was booked into the county jail on $20,000 bail and has yet to go to court for the charges, according to the Daily Journal.

As of this January, he was still active on what appears to be his Facebook, changing his profile photo to a blurry one of him smiling in a Cali hat (though the photo was originally posted in 2017). In the past few years, he looks to have spent some time in nearby Santa Rosa and Cloverdale, California. He has a goddaughter named Kylie who he once called "the most beautiful girl in the world." He appears to have had a few girlfriends and is still connected with Jimenez.

But even more recently, this past September, he was among those congratulating Butterworth and director Theo Love when they announced The Legend of Cocaine Island had been sold to Netflix.

The Legend of Cocaine Island premiered at the 2018 Tribeca Film Festival with a different name (White Tide: The Legend of Culebra), and received favorable reviews. The Playlist referred to Butterworth's Andy as "a Florida stereotype ... [who] could have fallen out of the pages of Pynchon’s Inherent Vice ... an odd duck." Surely Culpepper's fictional debut will bring even more attention to retelling of this true story, and audiences will be wondering what happened to the goofy dude with "Florida Boy" tattooed on his torso.

More like this
What’s New On Netflix: Ana De Armas’ 'Blonde' & A Nick Kroll Special
By Arya Roshanian
These 25 International Horror Movies On Netflix Prove Fear Is A Universal Language
By Bustle Editors
12 ’90s Movie References You Missed In 'Do Revenge'
By Radhika Menon
Here’s Everything Coming To & Leaving Netflix In October
By Jake Viswanath
Get Even More From Bustle — Sign Up For The Newsletter