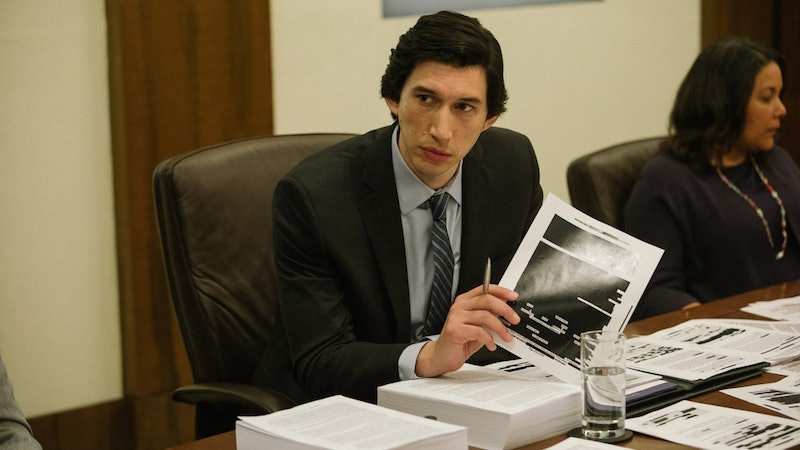 With the current presidential administration being such an unprecedented abomination, it's easy to forget that there was some pretty awful stuff happening in the U.S. Government even before Donald Trump became president. Like in the aftermath of 9/11, when the CIA conducted torture on detainees as part of the CIA's Detention and Interrogation Program. That controversial program was detailed in a report by the Senate Intelligence Committee, which was aided greatly by the work of senate investigator Dan Jones. Jones is the protagonist of the aptly-titled new film The Report, where he is portrayed by Adam Driver, but what happened to the real Dan Jones?

Although it may seem like eons since the Obama Administration when "The Torture Report" was compiled, it was just seven years ago when the report was completed in 2012; and just five years ago when it was released (partially) to the public in 2014. The investigation which resulted in the report was initially spurred by the revelation that in 2005 the CIA had destroyed videotapes of the agency's "enhanced" interrogations of detainees in Thailand in 2002. After the destruction of these tapes became public thanks to a 2007 New York Times report, the Senate Intelligence Committee launched an investigation into the act. Jones, a staffer for the committee, led that initial investigation, as well as the broader investigation that followed and resulted in "the report." California Senator Dianne Feinstein, who was chair of the Senate Intelligence Committee from 2009 until 2015 and under whom Jones worked, credited Jones as the most important investigator on the report. "More than anyone else, [the finished report] is a result of his effort," Feinstein said in a statement on the day the report went public in 2014.

Having spent the better part of a decade investigation wrongdoings and possible war crimes committed by the U.S. Government, you'd think that Jones — who prior to serving as a senate staffer had performed public service as a volunteer with AmeriCorps and as an employee at the FBI — would want to take it easy for a while. And while it is true that Jones is no longer working in the government, he still is fighting for justice in other ways.

Jones serves on the Board of Advocates for the nonprofit Human Rights First, whose goal is to secure human rights around the globe by starting here at home and holding the United States to a higher standard. Naturally, Jones' record of calling out the CIA's anti-American use of torture falls right in line with the organization's mission statement. Jones also runs his own global research and investigative firm called The Penn Quarter Group, which "works with executive boards, organizational leaders, creative departments, and other data-driven entities to fill information gaps and solve complex problems," according to its website. And just for good measure, Jones also serves as a fellow at the Carr Center for Human Rights at his alma mater, Harvard's Kennedy School.

Dan Jones obviously has a passion for public service and human rights, and The Report is giving his life's work the big screen treatment it deserves.

More like this
Man Meets Politics: ‘Boy Meets World’ Star Ben Savage Is Running For Congress
By Jake Viswanath
Austin Butler Recalls Lisa Marie Presley Showing Him Elvis’ Bedroom
By Jake Viswanath
Pamela Anderson’s Dating & Marriage History Could Be Its Own TV Series
By Jake Viswanath
Owen Thiele Asked Sundance Attendees About Films That Don’t Exist
By Grace Wehniainen
Get Even More From Bustle — Sign Up For The Newsletter
From hair trends to relationship advice, our daily newsletter has everything you need to sound like a person who’s on TikTok, even if you aren’t.