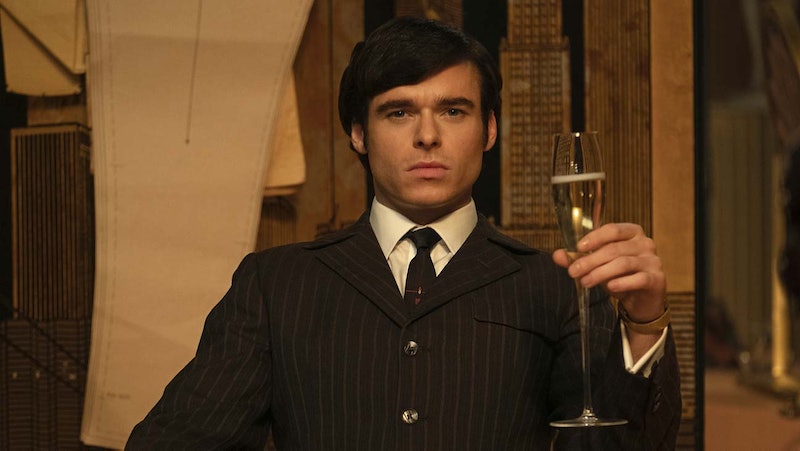 Music manager John Reid has been portrayed twice on the big screen recently — coincidentally, by two different Game Of Thrones actors. In the Freddie Murphy biopic Bohemian Rhapsody, he's played by Aiden Gillen. And in Rocketman, hitting theaters on May 31, he's played by Richard Madden. Both movies show him as being instrumental to Queen and John's careers, albeit in very different ways. But where's John Reid in 2019? He's been discovering acts in a whole new way.

Though Bohemian Rhapsody's focus is on Mercury, it includes Queen's initial formation as a band, as Reid helped figure out who they were and how to market them to an audience. Rocketman tracks the more intimate relationship between Reid and John, who were romantically involved for a time, but kept up their business relationship once their personal relationship ended.

Per The Independent, Reid and Elton John officially parted in 1998, ending 28 years of Reid managing Elton's career — a much longer length of time to what Rocketman shows. Though they'd had their differences in the past, this time it was permanent, and the two went their separate ways. In 1999, Reid left music management completely and essentially retired, according to The Daily Record.

The retirement seemed to coincide with paring down his life in other ways. The Independent reported in 1998 that the manager was selling most of his wide-ranging art collection. "I want to shrink the contents of three houses into one as I cruise into my 50s and focus my attention on simpler things. I want to de-clutter my life, make it less fussy and less formal," Reid said. His intent was to focus on film and theater management.

But Reid hadn't left the music world behind completely. The Age reports that in 2005, the normally private Reid took on his first public-facing TV role as a judge, on the Australian iteration of popular UK reality show and music competition The X-Factor, for their first season. Reid explained to The Age that after entering music management at age 18 and amassing a personal and business fortune, he was "quite honestly, fairly exhausted," and had to stop. He'd also turned down offers to host similar UK music based competitions including UK Idol and UK Popstars. So why suddenly pick up in Australia, of all places? According to Reid it's "partially because I don't live here and I can go back to my old life, if you like, which is very low profile."

Indeed, very little about Reid made the news following his hosting duties. Deadline noted he didn't show up at the Cannes premiere of Rocketman, and suggested the portrayal of him in Bohemian Rhapsody would make anyone want to stay away from the red carpet. Though the film shows Mercury angrily firing Reid and tossing him out of a limo for suggesting a solo career, in the Queen documentary Days Of Our Lives, drummer Roger Taylor said, “We had a good working relationship with John. He was very fiery and very feisty, but so were we.”

Madden was also kinder on the red carpet, telling Deadline, "Maybe in 10 years we will do something about him!" There's plenty enough music history involving Reid to warrant a biopic, so that's a pretty good guess. It seems, however, that the man himself would probably opt not to be involved.