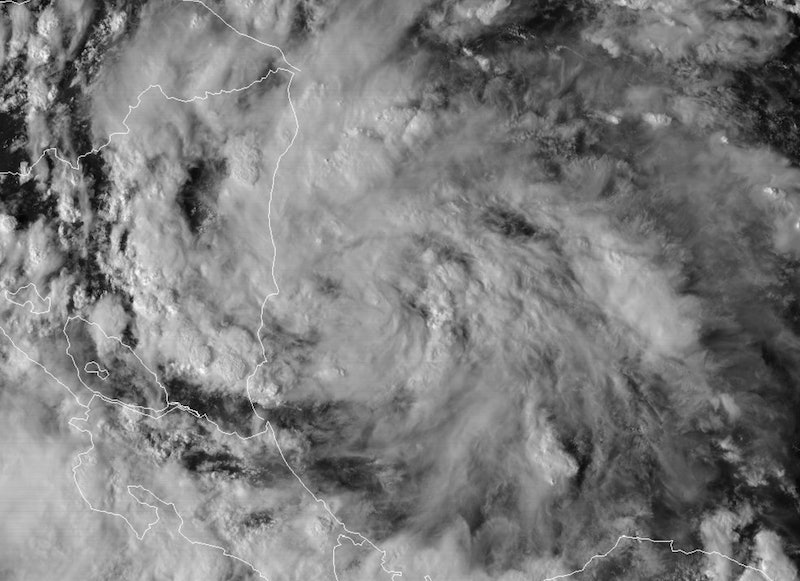 This year's hurricane season doesn't seem to have an end. After Hurricane Harvey, Hurricane Irma, Hurricane Jose, and Hurricane Maria, yet another storm has formed in the Caribbean Sea as a tropical depression. The storm is forecast to head up north toward the Gulf Coast and possibly take on the form of a hurricane. If so, this potential hurricane will be given the name "Hurricane Nate" and could possibly hit the Florida Panhandle.

At this moment, the system is still being categorized as a tropical storm, but the National Hurricane Center noted that it could strengthen into a hurricane over the weekend. The depression is currently on the southeastern end of the Honduras border and packs relatively smaller winds at 35 mph.

Nate could be moving toward the Florida Panhandle at a low enough speed to offer locals time to prepare for the potential hurricane. But for those around Honduras and Nicaragua, the tropical storm could lead to some amount of flash flooding, according to meteorologists. According to the National Hurricane Center:

Rainfall amounts of 15 to 20 inches are expected across portions of Nicaragua, with isolated maximum amounts of 30 inches possible.

Nicaragua and Honduras have been given tropical storm warnings to prepare for the potential rainfall. There is a likelihood that buildings in residential and commercial areas could face flooding. So, if you're in those parts of the storm's pathway, read up on how to protect yourself from a storm's potential damage.

If you want to know whether Nate will turn into a hurricane — hopefully it doesn't — just keep an eye on its trajectory. The present and estimated future location and movement of a hurricane can tell a lot about its potential intensification. According to AccuWeather meteorologist Dan Kottlowski, who was quoted in USA Today, the tropical storm can become strong if it moves into warm waters around the Yucatan Peninsula. If that happens, Kottlowski said that it could lead to "a powerful hurricane on our hands."

Varying reports of infrared imagery of the tropical storm don't exactly bode well. Satellite and infrared renderings show a storm that could strengthen into a hurricane if it's given some time along with a good amount of exposure to warm waters. In one particular European model, shown above, the tropical storm's intensity can be seen blooming.

Meteorologists note that apart from the Florida Panhandle, other potential areas that could get hit by Nate include Alabama, Mississippi, and the southeastern end of Lousiana. Folks in these areas should be ready for strong winds, possible soil erosion caused by the tropical storm, and potential electricity outages.

So far, there have been no definitive conclusions on what the tropical storm will end up doing. Meteorologists opine that Nate could gain wind-power at some 85 mph in a few days but, again, that depends on where it heads. If Nate ends up in the southeastern waters of the Yucatan Peninsula, there is a chance that it could experience light wind shear, which causes storms to turn into hurricanes due to the rapid intensification.

Forecasters still say that it's premature to try and confirm the track and nature of Nate, but if there is one way the tropical storm could weaken, forecasters say that it should move across actual land. If the storm hovers over land and not warm water, it could lessen its force and even steer off into the sea, dissipating into nothingness once and for all. That would be the best case scenario, and fortunately, it hasn't been ruled out just yet.