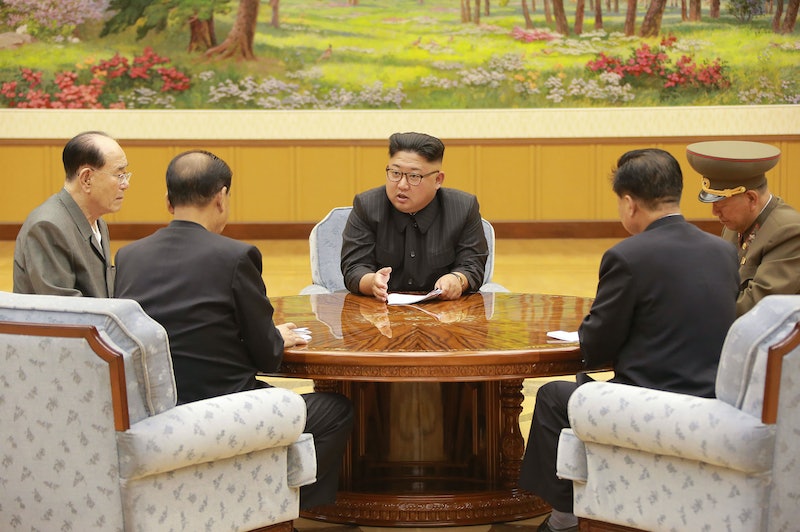 The rhetoric between U.S. President Donald Trump and North Korean leader Kim Jong-Un continues to escalate, and threats exchanged between the two countries have put many American citizens on-edge. Most recently, North Korea's foreign minister warned that the regime may soon begin testing a hydrogen bomb in the middle of the Pacific Ocean. This type of powerful explosive is not at all common; in fact, just a handful of countries in the entire world have them. So which countries actually have hydrogen bombs? Due to a 1970 treaty, only five countries are allowed to have them.

The Treaty on the Non-Proliferation of Nuclear Weapons pretty much aims to accomplish exactly what the name suggests: stop the spread of nuclear weapons worldwide. The treaty officially recognizes five countries as nuclear-weapon states: China, France, Russia, the United Kingdom, and the United States. All of these countries have conducted hydrogen bomb tests in the past, and they have agreed "to share the benefits of peaceful nuclear technology and to pursue nuclear disarmament aimed at the ultimate elimination of their nuclear arsenals." In exchange, no other countries are allowed to possess, test, or create nuclear weapons.

Of course, this isn't necessarily the case. Some countries, like India and Pakistan, never signed the treaty and are believed to possess nuclear weapons. And while North Korea ratified the treaty in the 1980s, it withdrew its commitment in 2013 and has since conducted numerous nuclear weapon tests.

In the past couple of years, the North Korean regime has reported more than once that it has successfully tested a hydrogen bomb, though experts have been skeptical about these claims, mostly because of just how powerful these weapons are.

A hydrogen bomb, also sometimes called a thermonuclear bomb or an H-bomb, mashes hydrogen atoms together to unleash neurons that create massive destructive energy. Hydrogen bombs can be up to 1,000 times more powerful than the atomic bomb that the United States dropped during WWII that completely destroyed Hiroshima.

These threats have come after months of escalating rhetoric between President Trump and Kim. In a heated speech at the United Nations general assembly last month, Trump lambasted Kim as a "Rocket Man ... on a suicide mission" and threatened to "totally destroy" North Korea. He even criticized the U.S. Secretary of State on Twitter just a few weeks after for "wasting his time" trying to negotiate with the North Korean regime, stating that instead he will "do what has to be done." What exactly that is, however, is unclear.

Kim has responded to Trump's tough talk with a few choice words, and concrete actions, of his own. He stated last month that he will "surely and definitely tame the mentally deranged US dotard with fire," and said that Trump will "pay dearly" for his persistent threats. He has also continued conducting long-range missile tests, including some in the past few weeks that have flown over Japan.

Of course, none of this is very assuring. In fact, it seems that each day relations between the two countries grow more and more tense with the possibility for peaceful negotiations and disarmament seeming to grow more impossible with each apocalyptic threat.

But so far, while North Korea has been conducting numerous missile tests, there is not yet any reason to believe that it has actually produced a successful hydrogen bomb, or that any of its long-range missiles could reach the mainland of the United States. Despite all of the threatening news that seems to come from North Korea each day, that should hopefully be enough of a silver lining to help Americans rest a little easier at night.