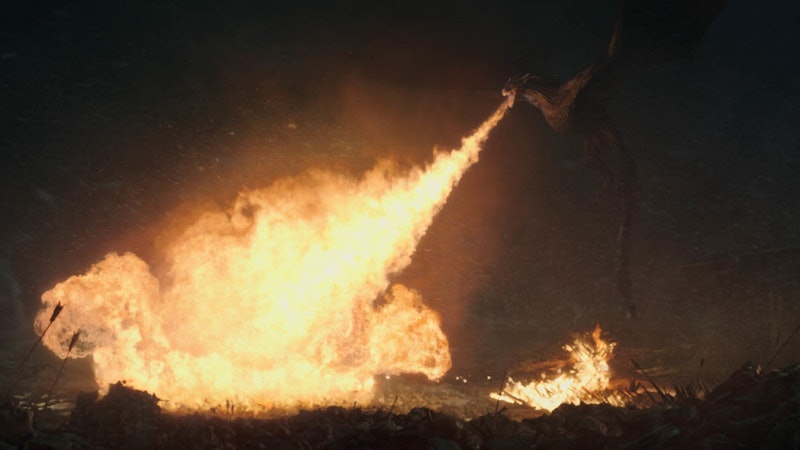 The Battle of Winterfell was one of the most highly anticipated events of the final season of Game of Thrones. Many fan favorite characters were predicted to die, but now that it's all over, the most important question is which dragons are still alive on Game of Thrones. Spoilers ahead. It was hard to tell at the end, and the dragons really took a beating, but it seems like both of Dany's remaining, fire-breathing dragons survived.

During this huge battle — the biggest one TV has ever seen — Drogon was ridden by Daenerys while Jon was on Rhaegal. And, though they both took a beating, it seems that, just like their riders, they were able to live out the night.

At first, it looked like Drogon and Rhaegal might be able to avoid the most dangerous parts of the battle. Dany and Jon watched from a higher cliff while the Dothraki started off the battle riding forward to meet the Army of the Dead, only to be snuffed out. It looked like every single Dothraki perished, prompting Daenerys to go in, and so she and Jon started their long flight above the fray. They weaved around, the dragons breathing long lines of fire on the wights as they looked for the Night King. Of course, they were met with many obstacles, one being her third dragon, Viserion.

Viserion was turned into an ice dragon last season and was under the Night King's control. So, in the Battle of Winterfell, it was Viserion vs. Rhaegal, who attacked each other in the air, hovering over the battle. Eventually, Jon fell off his dragon around the same time the Night King fell off of his, resulting into an almost-battle between the two of them. Rhaegal wasn't seen again after that.

Drogon and Daenerys stayed in the air the longest, but after his fire didn't damage the Night King at all, it all kind of went downhill. Viserion tried to hurt Drogon from behind with his ice fire, and then once on the ground, Drogon was then attacked by wights. They swarmed on top of him and stayed there even when he was in the air. He seemed like he could be a goner, but, luckily, he appeared again at the end of the episode, to comfort his mother as she cried over Jorah's body.

Finally, Viserion, who was already technically dead, officially died for good when Arya killed the Night King, causing all of his reanimated subjects to shatter into ice. Unfortunately, there's no saving someone from the Night King's reanimated magic, but at least he's no longer under his control.

Despite being a bit worse for wear, Rhaegal and Drogon survived this battle, and are even spotted flying overhead in a much clearer sky in the promo for GoT's next episode. It looks like all eyes are on moving south. But with the dragons still recovering (it looks like one of their wings might be torn), and most of her army decimated, what chance does Daenerys stand right now against Cersei? It seems like a very bad plan to charge in now, though admittedly, two dragons is better than Cersei's zero. And, hey, it wouldn't be Game of Thrones if the heroes had good odds, now would it?