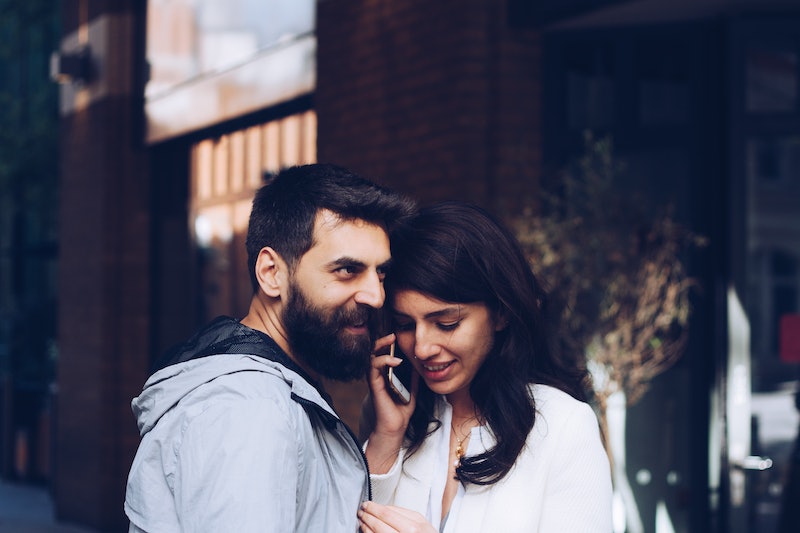 Most people never consciously choose which ear to use to talk on the phone. You start with the same side as the hand that grabbed the phone, then switch it up depending on how long you're trapped in — er, enjoying — the conversation, right? According to research, though, it's something to consider when you want your phone to perform better. The catch? The more efficient side depends on which type of phone you're using.

This summer, a Quora user posed a question: "Why should we use our left ear while talking on cell phones?" This is probably a reference to the urban legend claiming you should use your left ear for calls to protect your brain from radiation. It's been debunked pretty thoroughly, but engineer Harun Šiljak explained that research actually does suggest choosing a specific side for making calls. "Your body is not symmetric, and neither is your phone," he wrote. While engineers usually try to account for this in their designs, the position of your body still influences a phone's performance.

According to Šiljak, this is the result of two factors: reception and radiation, both of which are "inherently related to the fact that the phone uses electromagnetic waves of certain frequency to establish the connection to the base station." In his post, he delved into a few studies looking at how hand position affects the phone's radiation and "gain," or the measure of how well its antenna functions. Yes, cell phones still have antennas — they're just better-hidden than they were back in the day.

Overall, research suggests that your best bet for good signal is to not hold the phone at all. But until they invent a levitating phone, you're stuck using your hands.

That's where the antennas come into play. As explained in the Quora post, most antennas have an asymmetric design, so the signal isn't coming from the middle of the cell phone. Therefore, signal is "greatly influenced by our hand choice," Šiljak wrote. After all, radio waves bounce off nearby objects, including your body.

But not all phones are engineered in the same way. In 2016, researchers analyzed 26 types of phones on the market at the time, and they found that some models are better suited to certain sides of the body. I'll let Šiljak summarize the results:

If your particular phone isn't mentioned above, you can check out the results for yourself on Quora.

Basically, your phone's antenna works better on one side of your body, although using the more efficient side might be harder than you'd think. According to a 2013 study, the side you automatically use to listen to a cell phone is correlated with the dominant side of your brain. Left-brain dominant people are more likely to use their right hand to pick up the phone, while the opposite is true for right-brained people.

If your phone performs better on the right side, you're in luck! The study found that nearly 80 percent of participants tended to use their right side. (Fun fact: Left-brained people outnumber the right-brainers in the world.) If you and your phone disagree on your preferred side, though, you have two choices: Try to break your habit, or ride out the next few years of dropped calls and muffled conversations.