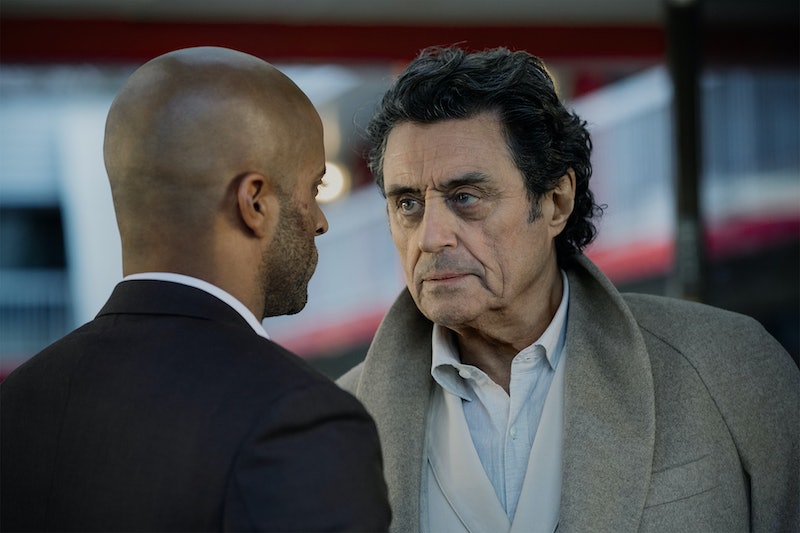 More than 15 years after its source text first hit bookshelves, American Gods is finally getting its own series. Both the show and the original Neil Gaiman book share the same basic premise: the Old Gods (from various mythologies) and the New Gods (of technology, television, media, and so on) are gearing up for war, and newly released ex-con Shadow Moon is somehow at the center of it all. The Old Gods of the book are based on real deities, but they've been renamed. Now of all the gods, Mr. Wednesday (Ian McShane) is one of the most important to the story — so, which god Mr. Wednesday based on? (Spoilers for the American Gods book and movie follow.)

Well, the ever-enigmatic figure actually has his roots in Norse mythology — which is similar to Greek and Roman mythology in many ways, albeit with a generally darker tone. When you think about it, Norse mythology is basically the perfect inspiration point for Gaiman, and it's no wonder he chose to pay homage to the it with American Gods, as well as with his latest book, Norse Mythology — a book you should definitely check out if you're interested in learning more about Mr. Wednesday.

At any rate, Mr. Wednesday is based on Odin, the all-father of the Norse pantheon. That's actually where he gets his nickname — the word "Wednesday" comes from the phrase "Woden's Day," which is an alternate spelling of "Odin."

Odin was the first of the Aesir gods (AKA the primary gods in the Norse myths) — and he, along with his brothers Vili and Ve, is credited with creating the world as we know it (from the corpse of Ymir the frost giant, no less). In this gory, Viking-approved creation myth, the sky is Ymir's skull, the mountains are his bones, the earth is his flesh, and the oceans are his blood... and mortals have Odin to thank for it. Oh, and after his grisly version of genesis, Odin crafted the first man and woman — this time out of ash trees, rather than giant corpse, thankfully.

In addition to being the first of the Aesir and our creator, Odin is often considered the god of wisdom, and is also closely associated with war, poetry, and magic. He presides over his palace Valhalla, the home of the Valkyries — the very same ones who inspired Richard Wagner's infamous "Ride of the Valkyries" composition. Odin is married to fellow Aesir goddess Frigg, and of all his children, Thor and Balder are the most famous. It's also worth noting that they pseudo-adopted the famous trickster Loki — even though he was a giant, not an Aesir god — and kept him close through many myths.

Wise, warlike, and a little twisted, Odin is in many ways darker than other creators from other traditions. He's the kind of guy who'd literally trade an eye for a deeper understanding of the world and its future demise. At many points, he seems more quiet and introspective than you'd expect from a deity worshipped by the famously warlike Vikings — but at other points, you'll see him torture his victims with a particularly inventive brand of cruelty.

All in all, Odin is quite the interesting blend of traits — and you can bet that American Gods' Mr. Wednesday will be too.