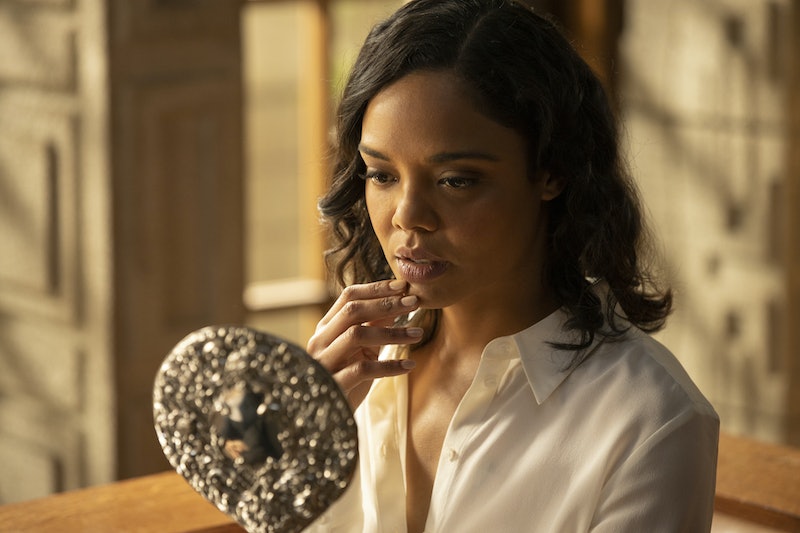 When Dolores escaped Westworld inside Charlotte Hale's body in the Season 2 finale, she brought five host consciousnesses with her, hidden inside her purse. But who were they? That's one of the central mysteries of Season 3, as viewers continue to wonder which Westworld host is inside Charlotte now that Dolores' mind is back inside her own body.

Season 3's third episode, "The Absence Of Field," explored this question most directly… but provided few answers. Viewers watched Charlotte cope with the pressure of adapting to someone else's life and body while infiltrating Delos from the inside, but it was never actually revealed who Charlotte is. There have, however, been several clues. Which leaves us with a few possibilities...

The way that Host Charlotte begins carving up her (his?) own skin is reminiscent of the way the host version of Jim Delos deteriorated in Season 2. However, Dolores also definitively states that whoever is inside Charlotte is a host, and refers to "our kind" when talking to her ally. While it's possible that Delos identifies as a host now that he's been turned into one, it doesn't sound as though Dolores is talking to somebody who used to be human. And for some reason it's hard to imagine crotchety old Jim Delos going so far for the cause as to sleep with Charlotte's ex-husband Jake…

Later in the episode, when Host Charlotte confronts the pedophile preying on her son Nathan, she describes herself to the terrified man as a "predator" before she strangles him and steals his dog. This is exactly the sort of avenging one can imagine Dolores acolyte Angela carrying out; she enjoyed gunning down human guests in Season 2, and the last thing she did that season was use her unassuming facade to approach and take out a man who meant her harm, much like Charlotte does here.

However, that action also resulted in her own death and the destruction of the Cradle, which contained all the host backups, so how could she be back? It's possible that Dolores recreated Angela from memory like she did Bernard — but did she really know Angela well enough for that?

The shot of Dolores and Charlotte spooning in the hotel bed directly parallels the shot from Season 2 of Dolores cradling Teddy's dead body. Could the mind inside Charlotte be his? Dolores does tell Host Charlotte that he/she "belongs" to her. And in the "weeks ahead" promo that aired after the Season 3 premiere, Maeve is heard asking, "Is that you in there, Teddy?"

It's unlikely that such a big twist would be spoiled in a teaser, so if Maeve is raising that possibility now, it probably won't turn out to be true. Not to mention the fact that Dolores uploaded Teddy's consciousness into the Sublime at the end of Season 2. It's possible that she made a copy of her lover's consciousness, but wouldn't that betray the significance of her decision to put him in the Sublime in the first place?

When Host Charlotte first woke up, she traced her fingers on her face in a delicate manner that was evocative of the way Clementine touched her own face in the Season 1 premiere, as Elsie was examining the effects of the new "reveries" code. Could the consciousness inside Charlotte belong to Maeve's former protegée? Clementine was a member of Dolores' army in Season 2, and it would create an interesting wrinkle in Maeve's mission against Dolores if she were forced to face off against someone as important to her as Clementine was.

But then again, Clementine was never exactly a "predator" as Charlotte claims to be in this episode. In fact, she was more often prey or pawn — unless she's talking about after she was turned into a brainwashed murder-bot by the real Charlotte at the end of Season 2. If that's the Clementine who's talking, then this could be the most compelling scenario of them all: that the host inside Charlotte is a version of Clementine still traumatized by what the real Charlotte turned her into.

Will the answer turn out to be any of these possibilities? Or someone even more unexpected? With only five episodes left in the season, viewers shouldn't have to wait too long to find out.

More like this
All The Clues Clint & Gina Aren’t Still Together After 'MAFS' Season 16
By Brad Witter
The 'Freeridge' Cast Shared Their Hopes For A Potential Season 2
By Grace Wehniainen
You Might Want To Rewatch This Key 'On My Block' Scene To Understand 'Freeridge'
By Grace Wehniainen
A 'Terminal List' Sequel & Spinoff Are Reportedly In The Works
By Kadin Burnett and Grace Wehniainen
Get Even More From Bustle — Sign Up For The Newsletter
From hair trends to relationship advice, our daily newsletter has everything you need to sound like a person who’s on TikTok, even if you aren’t.