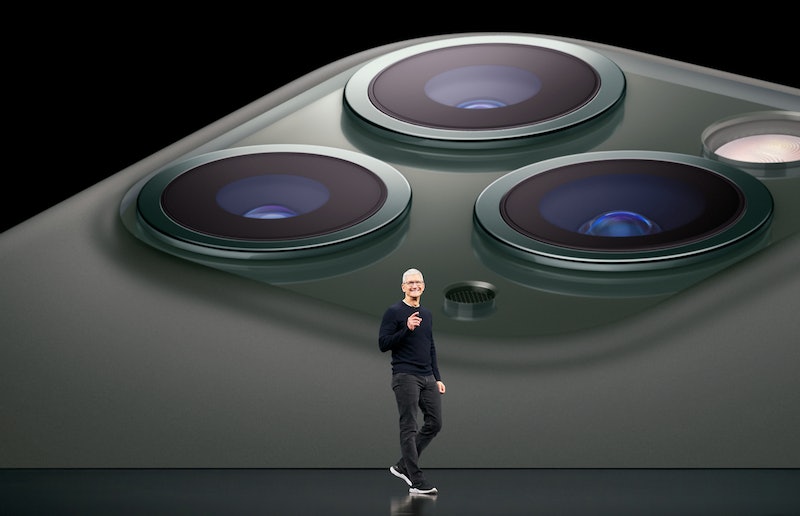 If you were anywhere near the internet yesterday, you likely heard Apple announced the iPhone 11 at its always-anticipated Apple Event. Apple’s three new iPhones — the iPhone 11, iPhone 11 Pro, and iPhone 11 Pro Max — each boast exciting upgrades that will have you looking at your current phone like, “It’s not you. It’s me. And the iPhone 11’s fancy new features.” The biggest change to all three of the smartphones, however, is arguably the cameras — but as for which new iPhone 11 model has the best cameras, a lot of of that is up to how you're planning to use them.

Yes, that’s cameras as in plural as in multiple cameras. The iPhone 11, the most basic of the three new models, has a dual-camera feature and both the iPhone 11 Pro and Pro Max have a triple camera, making them more of a leap from previous models than ever before — and also somewhat complicating the average consumer's decision making.

As all three models will be available for pre-order beginning this Friday, September 13. And you won’t have to wait long before you’ll have your hands on the latest version of the iPhone as they’ll be in stores starting Friday, September 20. So, as your finger anxiously hovers over the pre-order button pr you start making plans to stake out your nearest Apple store, let’s break down the latest iPhone camera features.

As the most “basic” of the three phones — “basic” in heavy, mostly sarcastic quotes — this phone only comes with a measly two cameras. (Ugh. How gauche.) Per a post on Apple’s blog, even the simplest model will be a major upgrade from your current iPhone camera.

Here are more specifics on some of those details:

Does this have the best camera? If you’re looking for the most cost-effective upgrade, the iPhone 11 with the dual camera seems like the way to go. It doesn’t have all the bells and whistles that the Pro and Pro Max have, as you would expect from the lower price. But if you’re looking to take even better pictures of your food or dog or self, this camera is going to be an improvement from your current iPhone.

The main difference between the Pro and Pro Max are size and storage. If you’re going to be taking a lot of pics and don’t feel like deleting them (or having them automatically store in Google Photos, which has free unlimited storage) and want to have a bigger screen, perhaps the Pro Max is for you. The camera features, however, are the same in the two models.

“iPhone 11 Pro and iPhone 11 Pro Max set a new standard in video, with the highest quality video ever in a smartphone,” Apple boasts in a blog post. Essentially, the sell is that the triple-camera feature gives a professional-level camera quality that is accessible to everyone of any skill level.

In addition to the upgrades noted in the iPhone 11 above, here are some more details on what the Pro and Pro Max bring:

As The Verge mentions, the triple-camera may be new for Apple but it’s been a part of Android’s most recent smartphones. The Pro and Pro Max both have 4X zoom, as does the iPhone 11, but so did the iPhone XS. The zoom hasn’t increased in these new models.

Are three cameras better than two? Other smartphone manufacturers seem to believe so, as they’ve been part of previous Androids. However, when it comes to the iPhone, you don’t seem to be getting much of an upgrade camera-wise for the additional cost. If you want a noticeably better iPhone camera but don’t care about a bigger screen or Telephoto framing, go with the iPhone 11.