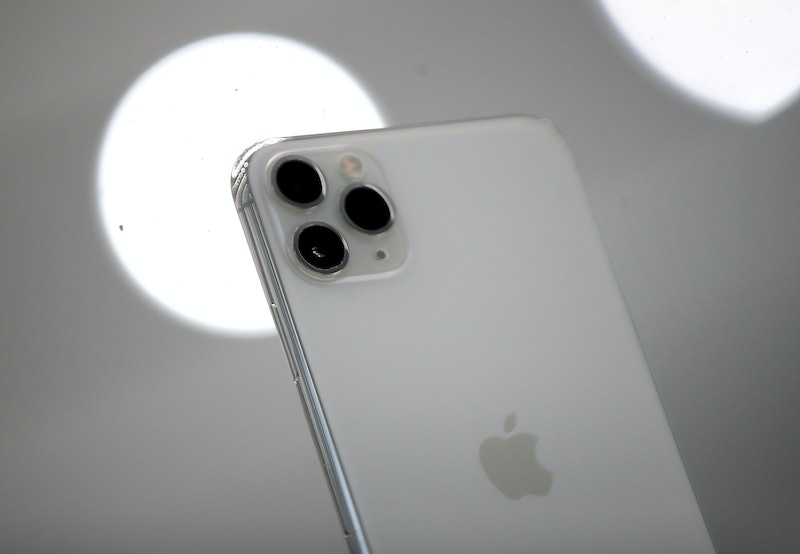 During Apple’s announcement of the upcoming iPhone 11 line on Tuesday, it became quickly apparent that the biggest boost the new models of the company’s iconic smartphone will be getting over previous models involves their camera systems. But exactly how are the iPhone 11 cameras different from older models, you ask? The short answer is that, while the foundation of the system is much the same, a new type of camera has been introduced — both increasing the number of cameras on each model and offering a perspective not previously available via iPhone cameras. The implications are many, so for the curious, here’s what you need to know.

iPhone cameras haven’t actually changed a ton since the iPhone 7. The 7 line featured a 12MP rear-facing camera with an aperture of f/1.8; additionally, the 7 Plus became the first iPhone to boast a dual camera system, with the second rear-facing camera being a 12MP telephoto lens. Meanwhile, the front-facing “selfie” camera on the 7 the line got an upgrade from the 5MP version the iPhone 6 had had, instead featuring a 7MP lens with an aperture of f/2.2. The iPhone 8’s camera system was much the same, although the rear-facing camera was capable of recording 4K video at up to 60 frames per second. Like the 7 Plus, the 8 Plus had two rear-facing cameras, one of which was a telephoto lens, as well as a 7MP front-facing camera. All of the models with telephoto lenses featured 2X optical zoom and Portrait Mode — a mode that highlights subjects in the foreground of an image by blurring the background somewhat.

Similarly, the iPhone X line didn’t see many changes to its camera setup; the telephoto lens on the original X and the two XS models gained an aperture of f/2.4, while the wide-angle lens stayed at f/1.8, and the front-facing camera became Apple’s TrueDepth camera, but otherwise, it pretty much stayed the same. It’s also worth noting that when the XR debuted in September of 2018 (it was announced at the same time as the XS and XS Max, and moving in to fill the void left by the recently-discontinued X) it brought another single-camera rear-facing system back into the range — although interestingly, it was also capable of Portrait Mode, which previous single-camera models didn’t have.

Portrait Mode on the 7 Plus, 8 Plus, X, XS, and XS Max used the telephoto lens to achieve the effect; the XR, however — lacking the telephoto lens — used AI and a bokeh effect to accomplish the look. This version of Portrait Mode had more limitations than it had in the X, XS, and XS Max due to the way it was implemented — for example, as ValueWalk pointed out in 2018, it didn’t always work on objects that weren’t human — but given that the XR was meant to be a lower-cost model than the XS or XS Max, it still mostly got the job done at a lower price point, thereby satisfying most users.

Which brings us to the iPhone 11 line, which was announced at Apple’s fall event in Cupertino, Calif. on Sept. 10. The camera setup for the regular iPhone 11 is more advanced than in the XR and roughly on par with the XS and XS Max: The rear-facing system has two cameras, although instead of a 12MP wide-angle lens and a 12MP telephoto lens, it has a 12MP wide-angle lens and a 12MP ultra-wide lens. The wide camera has an aperture of f/1.8, while the ultra-wide camera has an aperture of f/2.4. The 11 Pro and 11 Pro Max, however, have three cameras — wide-angle, telephoto (with an aperture of f/2), and ultra-wide. These three lenses will allow you to take photos with vastly different perspectives, all from the same vantage point — like so:

All three 11 models also feature an upgrade front-facing camera: Instead of 7MP, it’s now a 12MP TrueDepth camera. The phones also all maintain the same perks of the previous models, including Portrait Mode, image stabilization, and digital and optical zoom, while adding a few more to the stable — like Night Mode, which will activate automatically to improve images shot in low light conditions. Portrait Mode also reportedly now works on non-human subjects, meaning you should be able finally to take Portrait Mode photos of your pets now. (In theory, at least; Apple made a point of highlighting this quality during the launch event, but we've yet to see if it works in practice.)

Where the 11 models don’t really improve much is on the video recording front. While it’s true that the 11, 11 Pro, and 11 Pro Max all have a few new bells and whistles, like audio zoom and “QuickTake” video — video you can capture simply by holding down the shutter button, instead of having to toggle over to video mode — a lot of these features are enabled by software, rather than by the actual camera hardware. Pretty much the same quality of video — 4K at up to 60 frames per second, slo-mo support for 1080p at 120 or 240 frames per second, and so on — still results when recorded with the iPhone 11 models, compared to the XS and XS Max. (The extended dynamic range is slightly better, though, at up to 60 frames per second over the two XS models’ 30.) The front camera on the iPhone 11 range has gained the ability to shoot in slo-mo, so there’s that — but the, uh, “slofie,” as Apple termed slo-mo footage shot with the front-facing “selfie” camera, has, shall we say, not been widely embraced thus far.

Although most of the improvements to the iPhone 11 line’s cameras are welcome, it’s perhaps worth noting, as Sam Byford points out at The Verge, that it seems as if Apple is currently “playing catch-up” in this particular arena. Both the ultra-wide lens and Night Mode “are commonplace on Android phones,” writes Byford, observing both that LG “[pioneered] ultra-wide cameras on every one of its flagship phones since the G5 in early 2016” and that Google’s Pixel phones gained a night mode feature nearly a year ago.

But for ride-or-die iPhone users — especially those who particularly value the ease with which smartphones allow us not just to take photos, but to edit them and post them to social media wherever you are and whenever you want — the camera upgrades certainly do present an improvement over previous models.