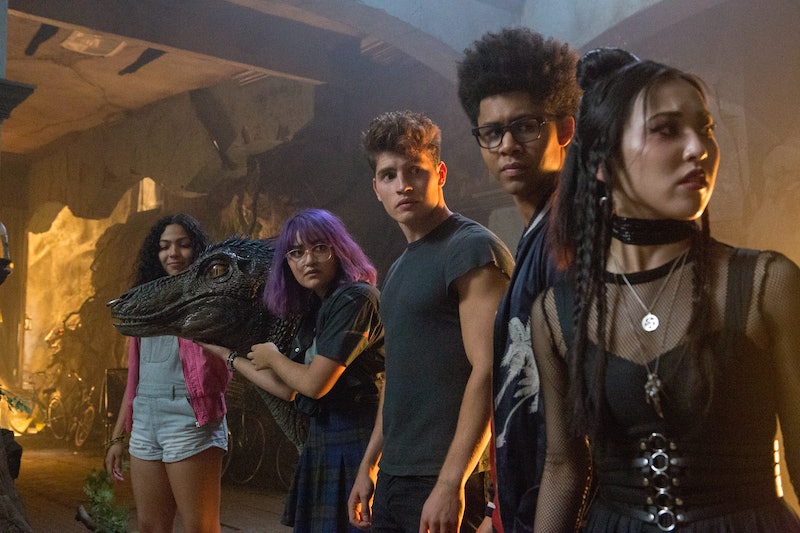 Spoilers for Marvel's Runaways Season 2 finale ahead! The mixed-up lives of Gert, Chase, Nico, Alex, Molly, and Karolina just got way more complicated — and not just because some of the parents have joined their side. Jonah's family is loose, body-snatching humans left and right, and it appears as of the Season 2 finale that one of the Runaways is secretly an alien host. That's right, Karolina's "brother" is still MIA and likely hiding in plain sight.

Midway through the season, Jonah's spaceship explodes with his trapped family inside and, moments later, Nico plunges her staff through the Big Bad's chest. However, Jonah and the rest of his family find new human hosts. By the end of Season 2, they have all but revealed themselves to each other — and have fridged Janet, Chase, and Karolina for dinner.

Quick recap: Jonah has taken over the body of Victor Stein, Chase's Dad. His alien wife is living inside Stacey Yorkes, Gert and Molly's mom. Their daughter, whose favorite part about being human is apparently frosting, is masquerading as Nico's mother Tina Minoru. Unlike Xavin, who can change their appearance but doesn't retain any memories or personality traits of the humans she resembles, these aliens are fighting against their human hosts. That said, there's just one member of Jonah's family missing, and nobody knows who it could be.

"He's our son," Mrs. Jonah explains, "and you know how unpredictable he is — wild! Perhaps he's struggling with his host as well."

Jonah speculates that if it was one of the parents they would know by now. That's logically sound. At the end of Season 2, Dale Yorkes (who would have revealed himself to Stacey) takes off with Gert and Old Lace to protect them both from whatever Gert's mother has become. Geoffrey and Catherine Wilder are both under arrest, courtesy of Alex. Everyone else is accounted for, either an alien or in an alien pantry, right? So who is it? One of the kids?

That's the most likely theory — right? He's way too calm at the end of the season, and in the comics Alex betrays the group and even starts a new Pride at one point. If Karolina's sister/Tina is right and it is one of the kids, keep an eye on Alex.

Molly's probably too strong, physically, to be taken over by an alien host, but what about Nico? Maybe that's why her brain was scrambled in the finale, instead of the drone. Her magic may be making her a more difficult host, and may have even suppressed this secret brother.

That would be a twist, right? As far as we know, Leslie's husband wasn't at the would-be launch — but he knew it was happening, and he wanted to go... then got pretty aggressive and tried to take over the Church of Gibborim. He can't be the only parental unit left out of the fun.

It was pretty apparent that something was up with Victor, Tina, and Stacey — but none of the kids were exhibiting suspicious behavior. That could mean that the alien family's suspicion is a red herring, that the brother is trapped inside an uncooperative host, or that he's a seriously sneaky threat who could spell trouble for the already troubled Runaways at any given moment when the series returns for Season 3.