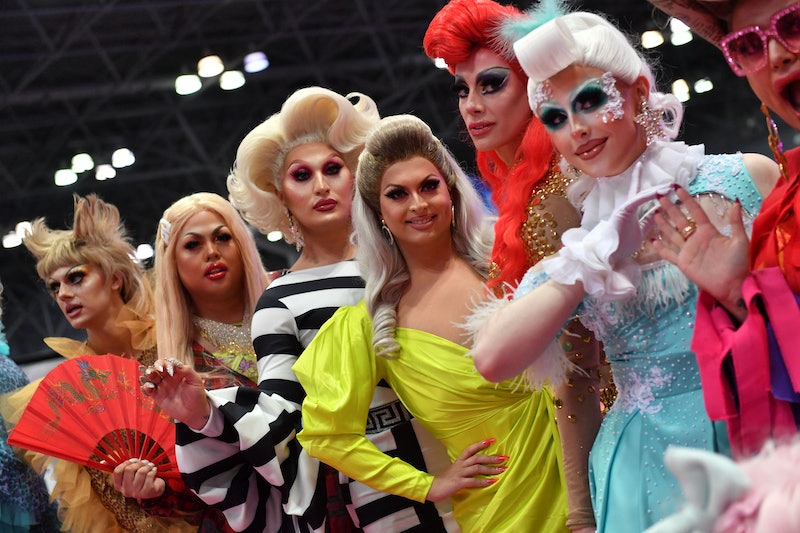 The past year saw RuPaul's Drag Race make its long-awaited UK debut, and following the show's runaway success, which led to an upcoming second season, fans still have a whole lot more Drag Race action to look ahead to. I am of course referring to the newly announced DragCon UK, which is set to take place in London early next year. But who will be appearing at RuPaul's DragCon UK? Here's everything fans of the reality TV phenomenon need to know.

According to the event website, the entire cast of RuPaul's Drag Race UK, as well as select U.S. queens (including Bianca Del Rio, Bob the Drag Queen, Ongina, Trinity the Tuck, and Miss Vanjie) are confirmed to be in attendance. As are members from the RuPaul's Drag Race UK Brit Crew.

Fresh from her recent Strictly Come Dancing stint, veteran judge Michelle Visage is also confirmed to be appearing alongside other amazing celebrities, including Danny Franzese, Scarlett Moffatt, and Baby Lame. So, it sounds like attendees have a lot to look forward to. But what is the fabulous event set to entail?

Well, similar to the original U.S. convention, visitors can expect a celebration of art, pop culture, and of course, all things drag. In addition to some show-stopping Main Stage performances from the world's most celebrated drag queens, ticket-holders will also be given the opportunity to attend panels with our favourite names from the franchise.

In between all the charisma, uniqueness, nerve and talent, fans will also have the chance to meet some of their most admired drag queens, and in true Drag Race spirit, people from all walks of life are welcome to join, including any drag-obsessed youngsters, who can become immersed in the convention's signature Kids Zone. Tickets for the two-day spectacular are now available, however, standard tickets have already sold out. For a heftier price of £250, the VIP Experience package is still up for grabs on the event's official website, but fingers crossed more tickets will be released in the coming weeks.

RuPaul's DragCon UK takes place at the Olympia London between January 18 - 19 2020, and I don't know about you, but I'm thrilled to see this sickening event make its way over to this side of the pond.

More like this
Joey Essex Is Rumoured To Be Dating A 'Love Island' Favourite
By Sam Ramsden
Molly-Mae & Tommy Fury Revealed Their Baby Girl's "Really Unusual" Name
By Sophie McEvoy and Sam Ramsden
'Love Island' Has Added Yet Another Bombshell To The Villa
By Bustle UK
Twitter Has Renamed Ekin-Su After *That* 'Dancing On Ice' Performance
By Sophie McEvoy
Get The Very Best Of Bustle/UK
Sign up for Bustle UK's twice-weekly newsletter, featuring the latest must-watch TV, moving personal stories, and expert advice on the hottest viral buys.