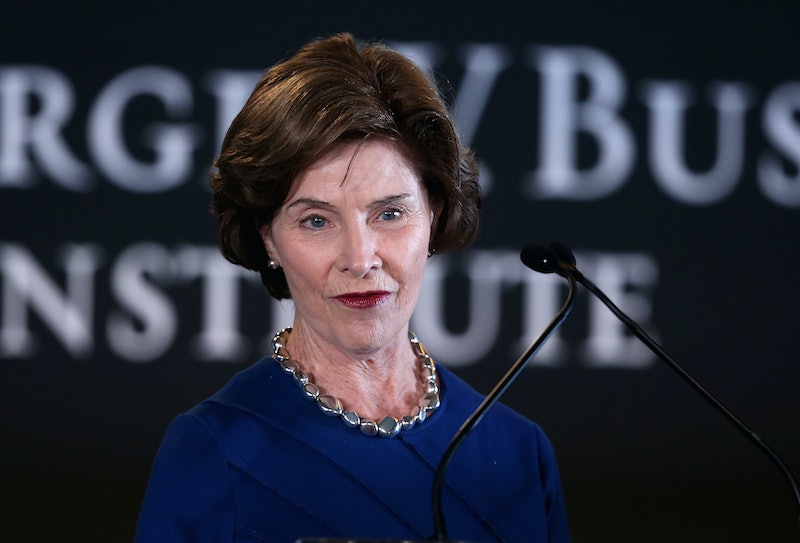 Donald Trump is under combined Democratic and Republican fire for his administration's "zero tolerance" immigration policy that leads to families inevitably being separated at the border. In fact, several top-ranking Republicans oppose Trump's family separation policy, including people like former first lady Laura Bush. And she's not the only one. Trump's wife, Melania, has also spoken up about her husband's policy, though she didn't place the blame squarely on his administration.

The major contention seems to be related to reports of some 1,500 immigrant boys, primarily from Latin America, being forcibly separated from their parents and kept in a Walmart-turned-detention center in Southern Texas. According to journalists who personally viewed the center, the boys follow strict routines, share dorm-like rooms with other children, and spend two hours outside the center for physical activity.

But while some Republicans have slammed Donald Trump for his aggressive immigration policy, most of them have added a caveat to their condemnations, placing emphasis on regulating and protecting the U.S. border. Time and again, major Republicans note they "appreciate" Trump's more conservative immigration stance but do not agree with breaking families apart.

In spite of growing concern and outrage, Trump administration officials have justified the presence and practice of keeping immigrant children in detention centers. Spokesperson for the Department of Health and Human Services (HHS) Kenneth Wolfe told Wall Street Journal, "HHS is legally required to provide care and shelter for all unaccompanied alien children referred by [Department of Homeland Security], and works in close coordination with DHS on the security and safety of the children and community."

But not everyone in the party agrees the department is going about that in the right way. Here are several well-known Republicans calling Trump out for his immigration policy.

Slamming Trump's family separation policy, the former first lady wrote an opinion-editorial in The Washington Post saying, "I live in a border state. I appreciate the need to enforce and protect our international boundaries, but this zero-tolerance policy is cruel. It is immoral. And it breaks my heart."

In a Facebook post, Nebraska's Republican Sen. Ben Sasse shared his thoughts on Trump's policy, saying that he appreciated the president's focus on immigration but did not agree with separating children from their parents. "There are many senior folks in the administration who hate this policy, and who want to do something better," Sasse posted. "But some in the administration have decided that this cruel policy increases their legislative leverage. This is wrong. Americans do not take children hostage, period."

While speaking with CBS, Maine Sen. Susan Collins said, "What the administration has decided to do is to separate children from their parents to try to send a message that, if you cross the border with children, your children are going to be ripped away from you. That is traumatizing to the children who are innocent victims. And it is contrary to our values in this country."

While Trump's administration has justified its practice of tearing families apart by turning to the Bible, Republicans like Oklahoma Sen. James Lankford have called Trump out for the act. Lankford told channel KOCO 5, "I have some phone calls — in fact, I have some calls today even — with DHS that will be coming up talking about this, how do we make sure we keep as many families together as possible."

On Twitter, Utah Sen. Orrin Hatch said that he understood the administrative hurdles when it came to reaching a sound, humane, and legally cohesive immigration policy but he noted he did not agree with Trump's family separation policy. "A policy that leads to separating children from their families is wrong," Hatch said.

South Carolina Sen. Lindsey Graham told CNN that Trump could end the policy "with a phone call" although the "blame" for America's immigration system was on both parties. "If you don't like families being separated, you can go tell DHS stop doing it," Graham said.

Texas Rep. Will Hurd told CNN, "We should not be using kids as a deterrent policy. This is something I think is actually unacceptable, and is something that as Americans we shouldn't be doing."

According to CNN, Alaska Sen. Lisa Murkowski decried Trump's policy as deviant from American moral values. "The time is now for the White House to end the cruel, tragic separations of families. They are not consistent with our values. The thousands of children taken from their parents and families must be reunited as quickly as possible and be treated humanely while immigration proceedings are pending," she said.

Murkowski added, "I am troubled that those seeking asylum are being turned away before they even have the opportunity to file their papers."

Calling out Trump's policy to CNN, Texas Sen. Ted Cruz said that children should not have to suffer because of the United States' "broken illegal immigration system." The senator went on to say, "All of us who are seeing images of these children being pulled away from moms and dads in tears are horrified. This has to stop. We should keep children with their parents. Kids need their moms. They need their dads."

National Republican Congressional Committee's chairman and Ohio Rep. Steve Stivers condemned Trump's policy in a Facebook post on Monday. Stivers wrote, "As a father, I know firsthand that there is nothing more important than family, and I understand why kids need to be with their parents. That's why I have publicly come out against separating children from their parents at the border."

On Twitter, Kansas Sen. Pat Roberts tweeted, "While I firmly support enforcing our immigration laws, I am against using parental separation as a deterrent to illegal immigration. My concern, first and foremost, is the protection of the children."

On Twitter, Arizona Sen. John McCain called Trump's policy "an affront to the decency of the American people" and said that administration should put an end to the practice immediately.

Trump's policy that has also accrued international outcry. The United Nations' high commissioner for human rights, Zeid Ra’ad Al Hussein, said, "In the United States, I'm deeply concerned by recently adopted policies which punish children for their parents’ actions. ... The thought that any State would seek to deter parents by inflicting such abuse on children is unconscionable."

It seems like the criticism against Trump's family separation policy can perhaps be best summarized in Hurd's comment to CNN. "This really isn't a Republican or Democratic issue," he said. "This is an issue about how should you treat children."