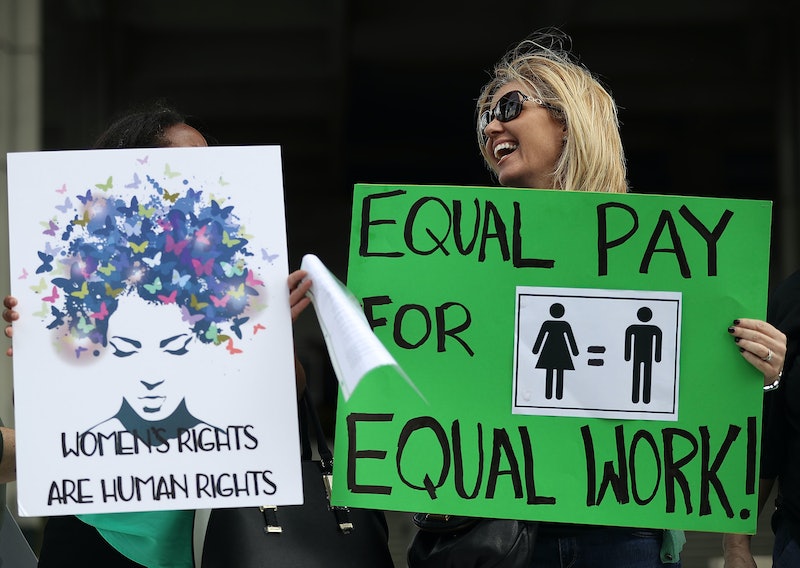 This year, April 10 symbolically marks the day that women finally earned the same amount that men were paid during the calendar year 2017. The average American woman makes 80 cents for every dollar paid to a man, while the gap for women of color is much wider. While women across the country take home less than their male colleagues, the disparities vary depending on where you live — and which state has the largest gender pay gap may surprise you.

In every state, the average woman takes home at least $5,000 less than men each year, the business research company Expert Market found by analyzing data from the National Women's Law Center. Louisiana and Utah are the worst states in terms of the wage gap, with women making $15,000 less than their male peers, according to the study released on Tuesday.

"This data is important because we know the U.S. has a problem with unequal pay, but what we didn't know is if this is a national problem or one which varies state to state," Expert Market researcher Grace Garland tells Bustle. "What we can see here is that there are huge variations between states, and some are clearly not doing enough to make sure that men and women have the same opportunities."

These huge discrepancies are attributed in part to the fact that more women work low-wage jobs, although gaps persist in every industry. In fact, nearly two-thirds of minimum wage workers are women, according to the National Women's Law Center. With so many women in lower-wage industries, there's also a dearth of women in high-paying positions, which results in men earning significantly more money.

On the other side of the spectrum, Florida has the smallest gender pay gap of nearly $5,500 a year. New York and California follow closely behind, with gaps less than $6,000. Last year, New York and California both made it illegal for employers to ask perspective employees about their pay history during the hiring process in order to prevent women's lower pay from following them even as they climb the career ladder. "Looks like it’s paying off," the Expert Market study says.

The study largely points out what most women already know: Men make more money. But it's staggering to see exactly how much women could be losing out on. If a woman earns $15,000 less than men in her state each year for 30 years, she cumulatively takes home $450,000 less than her male peers. That's far from insignificant.

Expert Market also points out that women in Louisiana — the state with the widest pay gap — essentially spend 10.5 hours of each 35 hour work week working for free, because they only make 70 cents for every dollar that men make.

If the wage gap were completely eliminated in Louisiana, a working woman in the state could pay for 39 more months of child care, two more years' worth of food for her family, and 20 more months of rent, a 2017 study from the nonprofit National Partnerships for Women & Families found. With women leading more than 276,000 Louisiana households — 38 percent of which are living below the poverty line — equal pay would help women put food on the table and lift their families out of poverty.

The gender wage gap hasn't disappeared despite Congress making it illegal to pay someone less because of their gender in 1963. Loopholes in the Equal Pay Act allow men to be paid more for a "factor other than sex,” which can make it challenging for women to prove they’re making less because they’re a woman.

If you want to advocate for equal pay, urge your elected officials to take action to close the wage gap. Specifically, you can ask members of Congress to support legislation that’s already in the works, including the Paycheck Fairness Act, which would close loopholes in the Equal Pay Act; the Workplace Advancement Act, which seeks to create more transparency about pay; and the Gender Advancement Pay Act.

Women in Louisiana and Utah may face the largest gender wage gaps, but pay inequalities persist across the nation.