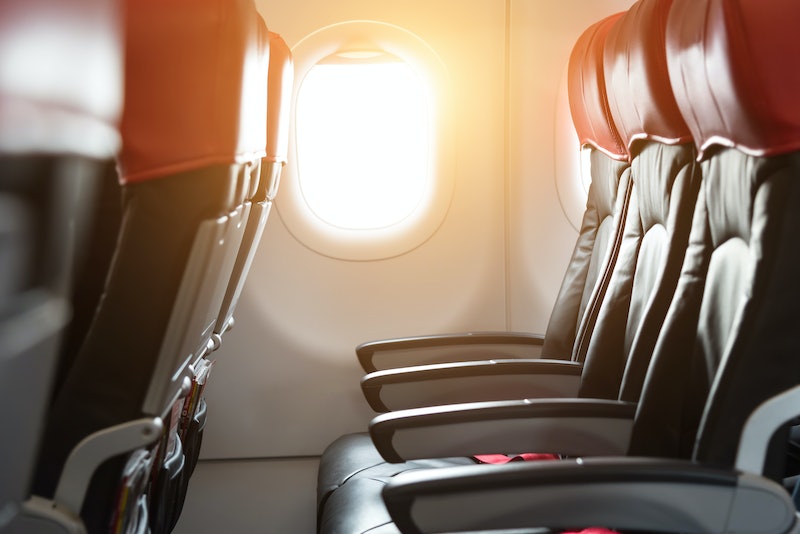 Airlines typically offer a range of options when it comes to legroom in economy class. Photo credit: Shutterstock
By Jessica Booth
Oct. 1, 2019

Flying somewhere might be the fastest way to travel, but unless you can afford first class seats, it certainly isn't the most comfortable. While first class offers seats that can extend into a bed with privacy, economy class offers... seats that kind of tilt backwards so you're not fully upright and enough leg room to sort of extend your legs so that they don't feel like they're cramping up. It can be rough flying in economy! But all planes aren't equal, and some airlines actually do offer a little bit more legroom in economy than others. If you're traveling any time soon, you'll probably want to know exactly which U.S. airline has the most legroom in economy class.

In a time when economy classes seem to be getting more and more seats, it can feel really, really hard to manage a long-haul flight without feeling your knees pressing against the back of someone else's chair for the duration of a flight. Airlines judge the amount of leg room by measuring the seat pitch. According to Seat Maestro, "a seat pitch is a term that's used to measure the distance from one seat headrest to the next — in front of it or behind it." It basically gives you a rough idea of how much room you'll have to stretch your legs out, and it definitely makes a difference in the long run. The industry standard for seat pitch is 31 inches.

When it comes to seat pitch, there's one airline that beats out all of the others. That would be JetBlue. According to the airline's website, seats on a standard aircraft typically have a seat pitch of 32 to 33 inches — the most legroom in coach of any U.S. airline based on average seat pitch.

As for the lowest seat pitches? That would be budget airlines Allegiant with 30 inches, Frontier with 28 inches, and Spirit with 28 inches and no recline — but, of course, you are paying less money, so these airlines typically offer a no-frills experience.

And if you really want to be a little more roomy, pay attention to the seat width as well. Seat Maestro points out that some airlines offer more seat width than others (this is the measurement from armrest to armrest). It's just as important — not having any space to put your arms is nearly as uncomfortable as not having any space to stretch your legs. JetBlue wins in that category again, with a seat width between 17.8 and 18.5 inches (the industry standard is 17).

If you really want extra leg room but you can't afford first class or business class, consider springing for an upgrade to an "extra legroom" seat. These cost more, but can have about four inches of extra space. That doesn't sound like much, but it's a lot when you're cramped on an airplane. And if you don't want to spend more, you can book seats in the exit row to get a little extra space. You can also try booking early to get seats in the very first row of the plane — then you'll have all the leg room you could need!